UNHCR/L. Dobbs
An estimated 400,000 people are displaced across Libya, including this man at a site near the capital, Tripoli.
16 February 2015

Strongly condemning the killing of 21 Egyptian Coptic Christians in Libya by an affiliate of the Islamic State of Iraq and the Levant (ISIL) Secretary-General Ban Ki-moon and the United Nations Security Council deplored the targeting of persons based on religious affiliation, while also urging Libyan parties to press ahead with their political dialogue.

In a statement issued to the press late yesterday in New York, the Security Council strongly condemned the “heinous and cowardly” apparent murder of 21 Egyptian Coptic Christians by an ISIL-affiliate in Libya.

“This crime once again demonstrates the brutality of ISIL, which is responsible for thousands of crimes and abuses against people from all faiths, ethnicities and nationalities, and without regard to any basic value of humanity,” Council members declared in their statement, reiterating their strong condemnation of the persecution of individuals and entire communities on the basis of their religion or belief.

The strong pronouncements from the UN follow yesterday's reported by ISIL of a video reportedly depicting hostages – believed to be Christian Coptic laborers from Egypt abducted form the Libyan city of Sirt – being led to a beach where they were then killed by assailants wielding knives.

Expressing deep sympathy and condolences to the families of the victims, to the Government of Egypt, as well as to the families of all victims of ISIL, the Security Council in its statement stressed again that ISIL must be defeated “and that the intolerance, violence and hatred it espouses must be stamped out.”

The members of the Council further emphasized that such “continued acts of barbarism perpetrated” by ISIL do not intimidate them but rather stiffen their resolve that there has to be a common effort amongst Governments and institutions, including those in the region most affected, “to counter ISIL, Ansar Al Sharia entities…and all other…entities associated with Al-Qaida,” as the Council resolved in its resolutions 2170 (2014) and 2199 (2015), adopted just last week.

Demanding the immediate, safe and unconditional release of all those who are kept hostage by ISIL, Ansar Al Sharia entities, and all other Al-Qaida associates, the Council underlined the need to bring perpetrators of these reprehensible acts of terrorism to justice and urged all States, in accordance with their obligations under international law and relevant Security Council resolutions, to cooperate actively with Libya, Egypt and all other relevant authorities in this regard.

For his part, the Secretary-General also condemned the latest killing perpetrated by ISIL, which he referred to by Da'esh, the Arabic acronym for the group. In a statement issued today by his spokesperson, he deplored the targeting of people on account of their religious affiliation.

“The Secretary-General expresses his condolences to the families of those who lost their lives as a result of this barbaric act and to the Government of Egypt,” the statement said.

Mr. Ban reaffirmed that the ongoing dialogue in Libya “is the best chance to help the country overcome its current crisis. Only through dialogue can Libyans build a State and institutions that are able to confront terrorism,” concluded the statement concluded.

In their statement, the members of the Security Council reaffirmed their full support for Special Representative of the Secretary-General, Bernardino León, who is mediating those talks, two earlier round of which were hosted by the UN Office at Geneva and which just last week moved to Libya. 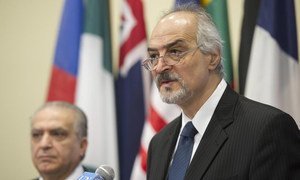 Urging global cooperation “to impair, isolate and incapacitate” terrorist threats, the United Nations Security Council today approved measures targeting sources of funding for the Islamic State of Iraq and the Levant (ISIL) and Al-Nusrah Front (ANF), condemning those buying oil from the groups, banning all trade in looted antiquities from Iraq and Syria, and calling on States to end ransom payments.