Multi-stakeholder partnerships hold the key to achieving global development goals, Martin Sajdik, President of the United Nations Economic and Social Council (ECOSOC) has said, stressing that ending poverty, transforming people's lives and protecting the planet will require more than the work of States alone and must draw from a diverse cross-section of actors.

“I think that without an all-encompassing approach toward the implementation of the post-2015 agenda, we will not be able to really fully succeed and implement the agenda,” said Mr. Sajdik in a recent article for Devex Impact, an initiative between Devex and USAID.

The ECOSOC President's observations come as the world prepares to wrap up by the end of this year, the landmark UN Millennium Development Goals (MDGs), agreed 15 years ago. There has been significant progress in meeting the targets. For example, global poverty has been halved well ahead of the 2015 deadline; in developing countries, 90 per cent of children now enjoy primary education; the number of people lacking access to improved drinking water has been halved, and the fight against malaria and tuberculosis has shown results.

Yet challenges persist, and with the deadline of the MDGs set for the end of this year, UN Member States are crafting a new set of targets, now known as sustainable development goals (SDGs). This new agenda will aim to address a raft lingering and emerging challenges, such as the fact that globally, 73 million young people are looking for work and many more are trapped in exploitative jobs.

Amidst a flurry of actions by bilateral and multilateral donors, foundations and non-profits, the agenda's framework and funding will include both private sector and other non-State actors.

“You cannot only rely on State actors,” Mr. Sajdik emphasized, “if we want to have a development agenda that is for all countries of the world both developed and developing, we cannot ignore the fact that there are many more actors.”

In a so called 'synthesis' report presented to the UN General Assembly last month – The Road to Dignity by 2030: Ending Poverty, Transforming All Lives and Protecting the Planet – Secretary-General Ban Ki-moon lays out the way forward, and among others, he stresses strengthening the means of implementation to revitalize the global partnership for sustainable development.

To that end, Mr. Sajdik said the UN is eager to more actively engage with business, especially through its Global Compact initiative for businesses that are committed to aligning their operations and strategies with universally accepted principles in the areas of human rights, labour, environment and anti-corruption.

Participation has grown rapidly, with more than 12,000 corporate participants and other stakeholders from more than 145 countries involved, a sign, according to Mr. Sajdik, that more companies see the importance of sustainability.

Still, he told deveximpact, it is a work in progress. Governments need to be better educated about the role of the private sector and there should be better parameters for partnership engagement, which will be one of ECOSOC's main areas of focus in the first half of this year.

That engagement needs to happen at various levels – from the global to the regional to the national – and ECOSOC is gathering examples of structures that governments can use to bring together stakeholders at a national level, encourage information sharing through regional bodies and work to further integrate stakeholders in top-level political forums, Mr. Sajdik added.

He picked up that thread in an article published for The Guardian, where he underscored that there is no question that broader, more strategic relationships with the private sector and civil society can yield great impacts for people at the bottom of the economic pyramid.

“Engaging with the private sector can mean more than generating financial support, but also tapping into skills and innovative solutions for addressing the root causes of poverty, and advancing the social, economic and environmental dimensions of sustainable development,” he said, adding: “We must work closely with stakeholders like the private sector … to build a climate that is open to the needs of enterprises and the very real determinants that effect how they make decisions.”

Spotlighting the role of ECOSOC, he said the body has provided space for member governments, the private sector, the philanthropic community, academia, non-governmental organization (NGOs) and others to hold a dialogue on ways to partner in support of the UN's development goals. Moreover, for the past six years, it has held an annual partnerships forum where stakeholders were brought together to jointly mobilize efforts across sectors such as public health, education, science and technology.

The ECOSOC President went on to say business has been widely recognized as an important partner in development, be it in terms of bringing knowledge and expertise, driving innovation and technology transfer, or financing innovation. The private sector's full commitment is thus vital for the success of the post-2015 agenda, and for creating a global partnership that is both inclusive and people-centred.

“Clearly, the operative word here must be collaboration and we need to be realistic about getting more companies, including small and medium enterprises, into the dialogue and ideally build on existing networks, chambers of commerce to help broaden how the UN supports and engages business going forward,” said Mr. Sajdik. 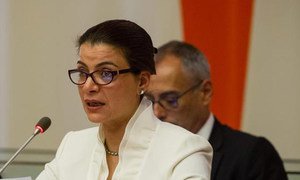 United Nations Headquarters in New York hosted the inaugural World Women’s Health and Development Forum today, bringing together world leaders, representatives of UN system entities, scientists, healthcare professionals, and members of civil society, the media and the private sector to discuss how best to advance the health, wealth and empowerment of women worldwide.