Mr. Ban said he was “profoundly concerned” about the appalling crimes that continue to be committed in Syria by all sides and he stressed that recent meetings in Cairo and Moscow emphasised the need to find a political solution based on the Geneva Communiqué.

“I welcome the international re-engagement for a political solution. I also welcome Saudi Arabia's proposal for a follow-up meeting,” he said. “A solution to the crisis will only be found through political negotiations. At the same time, we must urgently do more for the many people who are suffering.”

The humanitarian Summit being hosted by Kuwait on 31 March offered a chance to raise funds for the people of Syria and the neighbouring countries affected by the Syrian conflict and he requested that a high-level Saudi delegation attend the Syrian Pledging Conference.

He also welcomed the reopening of Saudi Arabia's embassy in Baghdad and the establishment of a Consulate in Erbil, which he hoped would deepen cooperation between the two countries, especially on countering terrorism.

“The UN stands ready to support the region in developing a comprehensive and joint response to the threat of Daesh [the Islamic State of Iraq and the Levant (ISIL)],” said Mr. Ban, turning to the threat of terrorism and the contribution that the UN can make to efforts to counter it.

Thanking Saudi Arabia for its support of the Counter-Terrorism Centre, he drew attention to the UN's efforts to address terrorism through Security Council resolutions and committees, the Global Counter-Terrorism Strategy and nearly 20 legal instruments.

“We agreed that everything possible must be done to reduce terrorism, both from Yemen and from Daesh,” said Mr. Ban, noting that he had also discussed the “very serious situation in Yemen” and the work being carried out by UN Special Envoy Jamal Benomar, who was working to find a way out of the current political crisis and a return to the path of the peaceful political transition.

Mr. Ban and King Salman also discussed the “dire plight” of the people of Gaza and their urgent need for assistance and the Secretary-General welcomed the King's reaffirmation of support for the Arab Peace Initiative.

During his visit, Mr. Ban also met with several other senior officials, including the Minister of Petroleum and Mineral Resources and the Minister of State for Foreign Affairs.

Mr. Ban also met with the Secretary-General of the Gulf Cooperation Council (GCC), Abdullatif bin Rashid Al-Zayani, to discuss several issues of common concern, focusing mainly on the situation in Yemen and efforts to counter terrorism.

As he looked forward to further close cooperation to tackle the many challenges facing the region and the world, Mr. Ban stressed that progress must come with human rights protection, including protection of the rights of women and all people's fundamental freedoms. 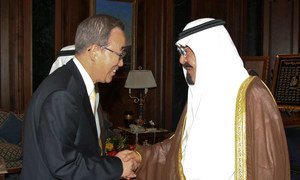 Secretary-General Ban Ki-moon has “learnt with sadness” of the death of King Abdullah Bin Abdulaziz Al-Saud, the late King of Saudi Arabia and Custodian of the Two Holy Mosques, who passed away yesterday at the age of 90.