This generation of young people – the largest the world has ever seen – has a historic opportunity to end poverty, combat climate change, create jobs and fight injustice, United Nations Secretary-General Ban Ki-moon told a Youth Forum at UN Headquarters in New York this morning as he called on the participants to get involved in shaping a future sustainable development agenda.

“Some of you may be focused on your studies. Some of you may be thinking about your careers. I am going to be honest. It is rough out there,” Mr. Ban said at the 2015 Time for Global Action Youth Forum organized by the UN's Economic and Social Council (ECOSOC). Council President, Martin Sajdik, also addressed the meeting, as did the Secretary-General's Envoy on Youth, Ahmad Alhendawi.

Today, there are 1.8 billion young people, representing one quarter of the world's population. Many struggle to find work, and are often hit hardest in conflict. The Secretary-General says that it is time now to see this huge cohort as a force of change that harbours the ingenuity and creativity to help solve the world's most daunting challenges.

"2015 is not just another year, it is a chance to change the course of history,” Mr. Ban said, as he emphasized that this is the “first generation with the potential to end poverty and the last generation to avoid worst effects of climate change.”

“It may be very hard to see what is happening beyond your borders. There are many people who are hungry, thirsty, and sick, and who cannot go to school. They are your brothers and sisters. This is why the UN is promoting sustainable development,” he added.

This year marks the end of implementation of the landmark UN Millennium Development Goals (MDGs), which world leaders agreed on 15 years ago. There has been significant progress in meeting the targets. For example, global poverty has been halved well ahead of the 2015 deadline; in developing countries, 90 per cent of children now enjoy primary education; the number of people lacking access to improved drinking water has halved, and the fight against malaria and tuberculosis has shown results, according to the UN.

But challenges persist and with the deadline of the MDGs approaching this year, the UN will craft a new set of targets known as the sustainable development goals (SDGs). Today's Youth Forum is a way to invite young people to get involved on the issues that matter to them, from job security to education. Globally, 73 million young people are looking for work and many more are trapped in exploitative jobs. In recent years, more than two and a half million more children in affluent countries fell into poverty, bringing the total above 76 million.

Children and adolescents bear the brunt of some of the world's deadliest conflicts. In Nigeria last April, 276 schoolgirls were kidnapped by Boko Haram. In Pakistan in December, terrorists killed 132 children at school and the same day in Yemen, more than a dozen schoolgirls were killed in a car bombing. Children are at risk in Central African Republic, Gaza, Syria, Iraq and South Sudan.

Mr. Sajdik, President of ECOSOC, said that for a child born in 1990, the base year for calculating progress in achieving the MDGs, he/she might be one of the 76 million young people currently unemployed or earn less than $2 per day – like 200 million other young people.

The young person born in 1990 is likely to be part of the 20 per cent of all youth in developing countries not engaged in education, employment or training. The situation is even worse for girls and young women, who face additional disadvantage and gender-based discrimination. Fewer girls and young women complete secondary level education, and young women aged 15-24 have HIV infection rates twice as high as young men for reasons beyond their control.

“The question is no longer if youth engagement is necessary but how to strengthen it,” said Mr. Sajdik, welcoming young people to voice their opinions on development, policy, climate change and education.

“There's no doubt that young people are facing multiple challenges to meet their potential but they are not giving up,” emphasized Youth Envoy Mr. Alhendawi.

“Everywhere I go, I see how the youth want to be connected to the United Nations; they will not miss any opportunity to volunteer and to advocate. They will participate at the Model UN just to simulate what's happening in the rooms with delegates. Today we are not simulating. This is the United Nations in action.”

As the UN representative on all things relating to young people, Mr. Alhendawi said that a “sense of ownership” is critical to the success of the future sustainable development agenda. The 1.8 billion young people worldwide are ready to “carry their share” of the post-2015 development.

In a keynote address urging an uptick in investment for children around the world, children's activist and 2007 International Children's Peace Prize Winner, Thandiwe Chama, called on delegates to be “on the right side of history” and place “our rights, the rights of children and youth, at the heart of the SDG agenda.”

“We should not only speak about youth engagement but also include children as key stakeholders,” Ms. Chama told those gathered, warning that without careful investment, children face a “wasted future.”

“We cannot achieve the SDGs without ensuring that my rights are the same as those of my brothers,” she continued. “Strengthen, fund and empower us.”

In her address, Gabriela Rivadeneira, President of the National Assembly of Ecuador, said that when the MDGs had been agreed, her country's economy had been “in ruins”. Indeed, years of forced adherence to the persisting neo-liberal economic model had broken her country's economy, deepened poverty and driven many people to seek homes elsewhere. That dire situation had particularly impacted the youth population.

Facing such a “disaster”, Ecuador had decided to undertake a deep social dialogue in, which in 2008 led to a new Constitution and the subsequent adoption of its 'Living Well' policy. This strategy “puts people before capital,” and makes human beings the subject of development. In the 8 years that followed this “citizens' revolution,” the country's youth and the rest of the population had made significant gains.

As such, Ms. Rivadeneira continued, Ecuador is now seeing a generational change that eschews reductionism and which breaks with age, gender and ethnic exclusion. “Today, youths are playing a role in public life and we are ensuring the political participation of persons as of 16 years of age in the democratic system.”

“Today, we are protagonists of national development and the reconstruction of our new Ecuadoran homeland,” she said, emphasizing that broader development, and the role of youth within that process, must ensure the eradication of poverty, environmental protection and protection of cultural identity and heritage. The goal should be sustainable development with identity and belonging, justice and the appropriate interaction with the environment. “All of these should be guiding principles of a global programme that calls for deep economic and cultural changes that lead us to a new international order,” she concluded. 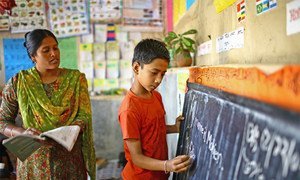 One in five adolescents worldwide is not in school, which means that some 63 million young people between the ages of 12 and 15 are denied their right to an education, mainly because they are marginalized and poor, a joint United Nations agency report has found, as pressure mounts to include universal secondary education in the post-2015 global development agenda.