Condemning the deadly bombing today of a Shia mosque in Sindh province in Pakistan, United Nations Secretary-General Ban Ki-moon deplored this “vicious targeting of people on account of their religious affiliation,” and called on the Pakistan authorities to step up their efforts to protect religious minorities and combat terrorism.

In a statement issued by his spokesperson in New York, Mr. Ban condemned the bombing of a Shia mosque in Pakistan's Sindh province today, which reportedly killed at least 54 people gathered for prayer.

“The Secretary-General is appalled by such vicious targeting of people on account of their religious affiliation,” said the statement, in which he calls upon the authorities to redouble their efforts to protect religious and ethnic minorities in Pakistan and to combat terrorism in all its forms.

The Secretary-General extends his condolences to the families of the victims and his sympathies to the Government and people of Pakistan, the statement concludes. 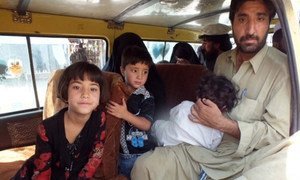 Strongly condemning yesterday’s attacks in Pakistan – which reportedly left more than 50 people dead in the wake of separate assaults on the country’s main airport in Karachi, and on busloads of Shia pilgrims in Baluchistan – United Nations Secretary-General Ban Ki-moon today urged the Government step up its efforts to tackle terrorism and religious extremism.