Participants in the United Nations-facilitated Libyan political dialogue in discussions in Geneva this week have agreed “on the principle” of convening future dialogue sessions in Libya, provided that logistical and security conditions are available.

“Participants expressed concern about the prevailing security conditions in different areas, condemning in particular the recent attack in Tripoli that took place as they were meeting at the UN Office at Geneva,” said a note released today by the UN Support Mission in Libya (UNSMIL).

Those taking part in the discussions have deferred to UNSMIL to start consultations with the parties on the venue of the political dialogue.

They said that current talks present “a moment of hope” and reconciliation for the Libyans and an opportunity to resolve the country's political and security crisis that should not be missed.

The parties' decision to consider moving the talks comes after representatives of municipal and local councils from a number of towns and cities from across Libya gathered in Geneva on Wednesday to discuss how to support confidence-building measures.

The meeting is another track of UN-led Libyan dialogue held at the Palais des Nations, whose first round convened in Geneva in mid-January and another round earlier in the week.

Mayors and representatives of councils were briefed about the dialogue process by Special Representative of the Secretary-General for Libya, Bernardino Leon, and a number of Libyans who participated in the meeting.

During the meeting, municipal and local council representatives also outlined the difficulties their constituencies are facing due to the conflict, including shortages in services and in food. 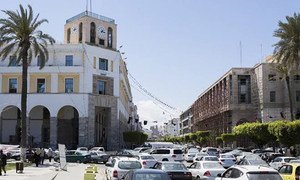 The United Nations Secretary-General has condemned today, in the strongest terms, the attack that took place at the Corinthia Hotel, in Tripoli yesterday.