The United Nations Mission in Mali (MINUSMA) has confirmed it used force in response to machine gun fire directed at its troops and towards the town inhabited by civilians, yesterday in Tabankort, in the restive north of the country.

The attack was carried out with a heavy-vehicle mounted machine gun belonging to the Mouvement national de libération de l’Azawad (MNLA), a UN spokesman told reporters in New York this afternoon.

Farhan Haq said that before engaging, MINUSMA fired warning shots at the vehicle which went unheeded. In accordance with its mandate to protect civilians, its personnel and its assets against imminent threat, MINUSMA then targeted the vehicle, disabling it.

Following tensions in Tabankort since the beginning of the month, the Mission has repeatedly reminded all armed groups of their obligation to respect the ceasefire agreement they signed on 23rd of May 2014. The UN reiterates its call to all parties to immediately cease hostilities and respect their ceasefire commitments, said the spokesperson.

This attack is the latest in a recent spate of violence targeting UN peacekeepers in Mali. Briefing the Security Council earlier this month, the Under-Secretary-General for UN Peacekeeping Operations, Hervé Ladsous, said ‘no Mission has paid as much in terms of blood’ and that MINUSMA’s peacekeepers face assaults on a virtually daily basis, in the form of rocket attacks on bases and targeted attacks with improvised explosive devices. 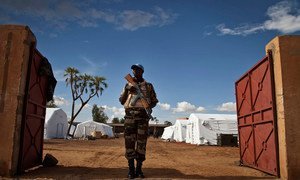 The United Nations stabilization mission in Mali (MINUSMA) has condemned the attack that wounded eight peacekeepers – three seriously – yesterday, in the Gao region.