United Nations Secretary-General Ban Ki-moon has welcomed the transfer to the International Criminal Court (ICC) in The Hague today of senior Lord’s Resistance Army (LRA) commander Dominic Ongwen, as well as his surrender on 6 January in the Central African Republic.

The ICC is currently escorting Mr. Ongwen – against whom the Court back in 2005 issued an arrest warrant for war crimes committed in Uganda – to its detention centre in the Netherlands. Upon arrival, Mr. Ongwen will receive a medical visit and will appear, as soon as possible, before the Judges in the presence of a Defence Lawyer. The date of the initial appearance hearing will be announced soon.

In a statement released by the Secretary-General’s spokesperson this afternoon, Mr. Ban highlighted that Mr. Ongwen's transfer to the ICC marks an ‘important milestone in accountability,’ with the first LRA commander being brought before the Court.

“It is a step forward in efforts to bring justice to the thousands of victims of LRA violence in Uganda, South Sudan, the Democratic Republic of the Congo and CAR [Central African Republic] over the past 28 years,” the UN chief said.

The Secretary-General welcomed the cooperation among the Governments of the CAR, Uganda, the United States, Belgium and the Netherlands, and the support provided by the UN Multidimensional Integrated Stabilization Mission in the CAR (MINUSCA), the African Union Regional Task Force (AU-RTF) and the ICC in facilitating the expeditious transfer of Mr. Ongwen to The Hague.

Mr. Ban also paid tribute to the efforts of the AU-RTF and urged all troop-contributing countries of the region to remain committed to ending the threat posed by the LRA and bringing to justice LRA leader Joseph Kony. He called on the LRA to immediately disarm.

Mr. Ongwen, who was transferred to ICC custody on January 17, 2015, was the alleged Commander of the LRA's Sinia Brigade. On 8 July 2005, ICC Judges issued an arrest warrant against Mr. Ongwen for three counts of crimes against humanity (murder; enslavement; inhumane acts of inflicting serious bodily injury and suffering) and four counts of war crimes (murder; cruel treatment of civilians; intentionally directing an attack against a civilian population; pillaging) allegedly committed in 2004 within the context of the situation in Uganda.

He is part of a case that is also filed against Joseph Kony, Vincent Otti and Okot Odhiambo.

During the initial appearance hearing, the Judges of Pre-Trial Chamber II will verify the identity of the suspect and the language in which he is able to follow the proceedings. Mr Ongwen will be informed of the charges against him. The Judges will also schedule a date for the opening of the confirmation of charges hearing, a preliminary step to decide whether the case will be referred to a trial or not.

In a statement from ICC today, the President of the Assembly of States Parties (ASP) to the Court’s founding Rome Statute, Minister Sidiki Kab, said that Mr. Ongwen’s transfer to the custody of the Court constituted an important success for the Rome Statute system.

“The affected communities will have the opportunity to see international justice address the horrific violence that took place in Uganda. I join the Court in its appreciation to all those States and organizations whose cooperation made possible the successful implementation of the Court's decisions,” Mr. Kaba emphasized.

♦ Receive daily updates directly in your inbox - Subscribe here to a topic.
♦ Download the UN News app for your iOS or Android devices.
Central Africa 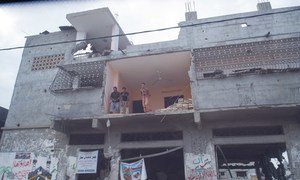 The Prosecutor of the International Criminal Court (ICC) today announced that she has opened a preliminary examination into the situation in the occupied Palestinian territory, following the accession earlier this month by the Palestinian Authority to the Court’s founding Rome Statute.