UN Photo/Ilyas Ahmed
A student at the Hamar Jajab School in Mogadishu holds a peace-themed comic book for children produced by UNSOM during the commemoration of Somalia’s ratification of the Convention on the Rights of the Child on 20 January 2015.
20 January 2015

The United Nations today applauded Somalia’s ratification of the Convention on the Rights of the Child (CRC) – a move which was praised as being an “important step” towards protecting and promoting the rights of all children in the war-torn nation and an explicit commitment towards improving the lives of its youngest citizens.

“By ratifying the Convention on the Rights of the Child, the government of Somalia is making an investment in the wellbeing of its children, and thus in the future of its society,” Anthony Lake, Executive Director of the UN Children’s Fund (UNICEF), declared in a press release, as he welcomed the news.

“The central message of the Convention is that every child deserves a fair start in life,” he continued. “What can be more important than that?”

The CRC was adopted by the General Assembly on 20 November 1989 and has been ratified by 195 countries, including Somalia, making it the most widely ratified international human rights treaty in history. As of today, only two countries have yet to ratify the landmark treaty – South Sudan and the United States.

Nonetheless, its widespread adoption marked the first time that children were explicitly recognized as having specific rights and the treaty itself is considered to be a powerful human rights tool.

At a ceremony marking the ratification and held at a local school in the Somali capital of Mogadishu, Special Representative of the Secretary-General for Somalia (SRSG), Nicholas Kay, welcomed the Somali Government’s dedication to improving the lives of its children alongside Somali President Hassan Sheikh Mohamud and before hundreds of schoolchildren.

“As the nation recovers from decades of conflict, the Federal Government and its international partners have a duty to protect and serve Somalia’s most vulnerable communities,” Mr. Kay affirmed.

“I hope Somalia will now also begin the process of becoming party to the Optional Protocols to the Convention on the Rights of the Child,” he added, promising the UN’s support to Somali authorities in that regard.

While the CRC is a universally agreed set of non-negotiable standards and obligations, providing protection and support for the rights of children, its three Optional Protocols deal, respectively, with protecting children from trafficking, prostitution and child pornography; prohibiting their recruitment in armed conflict; and allowing children to bring forward their complaints to the UN if their rights are being abused.

For her part, Leila Zerrougui, the UN Special Representative for Children and Armed Conflict, celebrated Somalia’s move ‘in bringing us closer to our common objective of protecting the country’s children from the impact of conflict’, and echoed Mr. Kay’s appeal for the Somali authorities to move forward in ratifying the Optional Protocols, including the Optional Protocol on the involvement of children in armed conflict.

In addition, she called on the Government to maintain its commitment to the objectives of the Children, Not Soldiers campaign by working towards a child-free army by the end of 2016.

The ratification process will be finalized once the Government of Somalia deposits the instruments of ratification at UN Headquarters in New York. 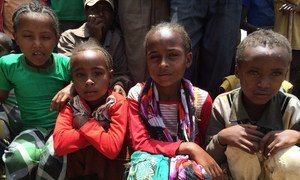