World Bank/Aisha Faquir
A man smokes on the side of the road as a bus passes in Nepal.

19 January 2015
The international community has an opportunity to reverse the global epidemic of noncommunicable diseases (NCDs) and prevent the grim annual toll of 16 million people who die of heart and lung diseases, strokes, cancer and diabetes before the age of 70, the United Nations World Health Organization (WHO) revealed today.

Speaking at the launch of the WHO's Global status report on noncommunicable diseases 2014, the agency's Director-General, Dr. Margaret Chan, announced that by investing anywhere from $1 to $3 per person per year, countries could dramatically reduce illness and death from NCDs.

“In 2015, every country needs to set national targets and implement cost-effective actions. If they do not,” Dr. Chan said, “millions of lives will continue to be lost too soon.”

According to the report, nearly half of premature NCD deaths are preventable. In fact, 16 million of the 38 million lives lost to NCDs, or 42 per cent, could be saved through ramped up government policies targeting tobacco use, the harmful use of alcohol, unhealthy diets and physical inactivity, and providing universal health care.

In Brazil, the report notes by example, the NCD mortality rate is dropping 1.8 per cent per year due, in part, to the expansion of primary health, in direct contrast to the global trend, which saw the rate of NCD deaths rise by 9.6 per cent between 2000 and 2012.

Despite Brazil's successes in reducing NCD mortality, however, the WHO is calling for more action to be taken to reduce the epidemic which is particularly widespread in low- and middle-income countries where NCD deaths are overtaking those from infectious diseases. In addition, the rate of premature deaths is especially impacting those countries' efforts to alleviate poverty and achieve specific development goals. From 2011 to 2025, cumulative economic losses due to NCDs for low- and middle-income countries are estimated at $7 trillion.

As a result, the UN agency has outlined a nine-point voluntary action plan which, it says, would address key NCD risk factors including tobacco use, salt intake, physical inactivity, high blood pressure and harmful use of alcohol and seek to reduce the number of premature NCD deaths by 25 per cent by 2025.

“Our world possesses the knowledge and resources to achieve the nine global NCD targets by 2025,” explained Dr. Oleg Chestnov, the WHO's Assistant Director-General for Noncommunicable Diseases and Mental Health. “Falling short of the targets would be unacceptable.”

“If we miss this opportunity to set national targets in 2015 and work towards attaining our promises in 2025, we will have failed to address one of the major challenges for development in the 21st century,” concluded Dr. Chestnov. 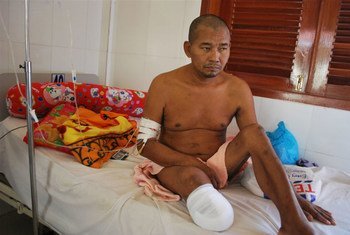 10 July 2014
With world leaders gathered today in New York for the United Nations General Assembly’s review of efforts made since 2011 in controlling non-communicable diseases like heart disease, cancer, diabetes and chronic lung disease, the Organizations’ top health official launched a new report that shows progress at the national level has been insufficient and uneven.