After an economically disappointing 2014, developing countries can expect an uptick in growth in the new year as soft oil prices, a stronger United States economy, and continued low global interest rates help fuel their recovery, according to a new flagship study issued by the World Bank Group.

The biannual Global Economic Prospects report, released today, projects a global economic expansion of 3 per cent for 2015, 3.3 per cent for 2016, and 3.2 per cent in 2017 – a boost following last year’s anaemic 2.6 per cent growth.

At the same time, the report adds, developing countries are expected to surge from last year’s 4.4 per cent growth to 4.8 per cent in 2015 and then strengthen to a more robust 5.4 per cent by 2017.

“In this uncertain economic environment, developing countries need to judiciously deploy their resources to support social programs with a laser-like focus on the poor and undertake structural reforms that invest in people,” explained World Bank President Jim Yong Kim in a news release marking the report’s launch.

“It’s also critical for countries to remove any unnecessary roadblocks for private sector investment,” Mr. Kim continued. “The private sector is by far the greatest source of jobs and that can lift hundreds of millions of people out of poverty.”

Despite the positive developments, the report paints a largely mixed picture depicting both the growing momentum of economic activity in the United States and the United Kingdom amid healing labour markets and a stuttering recovery in the Eurozone and Japan.

In addition, a number of risks continue to overshadow the potential of full global recovery, particularly weak global trade, possible financial market volatility, the strain low oil prices will place on oil-producing countries, and the risk of prolonged stagnation or deflation in the Eurozone or Japan.

“Worryingly, the stalled recovery in some high-income economies and even some middle-income countries may be a symptom of deeper structural malaise,” cautioned Kaushik Basu, World Bank Chief Economist and Senior Vice President. “As population growth has slowed in many countries, the pool of younger workers is smaller, putting strains on productivity.”

Nevertheless, Mr. Basu added, there are “some silver linings behind the clouds.”

“The lower oil price, which is expected to persist through 2015, is lowering inflation worldwide and is likely to delay interest rate hikes in rich countries. This creates a window of opportunity for oil-importing countries, such as China and India,” he said, noting the World Bank’s expectations for India’s growth to rise to 7 per cent by 2016.

The developing world and large middle-income countries are, in fact, expected to benefit from lower oil prices. In Brazil, Indonesia, South Africa, and Turkey, the fall in oil prices will help lower inflation and reduce current account deficits. Meanwhile, exporting countries, such as Russia, can expect their economies to contract as a result, prompting opportunities for wide-scale structural reforms.

“For both exporters and importers, low oil prices present an opportunity to undertake reforms that can increase fiscal resources and help broader environmental objectives.” 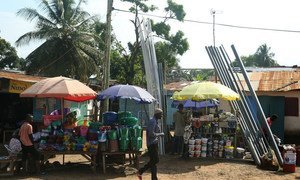 Job losses and food insecurity are among the far-reaching and persistent socio-economic impacts of Ebola in Liberia and Sierra Leone, according to the results of two new World Bank Group surveys released today.