Eight cities in Central Asia and the Caucasus, including capitals Tbilisi and Bishkek, have signed on to strengthen community resilience by integrating disaster risk reduction into their national and local policy, representing a big boost for the United Nations initiative which already has over 2,400 participants worldwide.

The global campaign, Making Cities Resilient: My City is Getting Ready!, launched in 2010 for a period of five years until 2015, is promoted by the Geneva-based UN Office for Disaster Risk Reduction (UNISDR).

“The campaign helps participants to become better organized and to identify key priorities for action for risk reduction. They can also benefit from the shared experience of other participants facing similar challenges. It is a very dynamic and interactive campaign,” said Madhavi Malalgoda Ariyabandu, UNISDR regional coordinator.

UNISDR’s initiative, now in partnership with the European Commission Humanitarian Aid and Civil Protection department (ECHO), is titled “Strengthened Disaster Risk Reduction in Central Asia and the Caucasus through greater fostering of the Hyogo Framework for Action priorities.”

The eight cities to sign up are Noyemberyan and Berd in Armenia; Tbilisi and Gori in Georgia; Oskemen and Ridder in Kazakhstan; and Bishkek and Kara-Kol in Kyrgyzstan.

“These cities and towns are committing to a ten-point checklist of actions which help them to become resilient to disasters and to manage their growth in a sustainable way,” said Ms. Ariyabandu.

The worldwide campaign is based on 10 essentials for developing local resilience, which in turn build on the five priorities for action of the Hyogo Framework for Action (HFA), endorsed by UN Member States for the period 2005-2015.

Central Asia and the Caucasus are exposed to a range of natural and technological hazards such as earthquakes, landslides, mud and debris flows, avalanches, floods, drought and extreme temperatures inflicting serious human and economic losses. Risks and exposure to risk are exacerbated by the rapid growth of urban population and climate change.

Over the 30-year period from 1980, 14 million people were affected by 131 major disaster events with economic losses of $3.8 billion. The destructive earthquake in Spitak, Armenia in 1988 and the extreme cold spell across Central Asia in 2008, prove the importance of strengthening communities.

To address these challenges, the campaign will aim to build local capacity to assess risks of natural hazards, update action plans which are disaster risk inclusive, increase accessibility of international expertise in disaster risk reduction, and foster exchange of experiences between municipalities and local governments.

A post-2015 framework for disaster risk reduction is expected to be approved at a world conference, in March 2015, in Sendai, Japan, emphasizing the need to continue to work to strengthen community resilience, particularly in municipalities with less than 10,000 inhabitants. 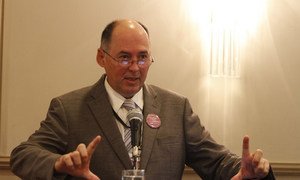 With the addition of Aguas da Prata, Brazil, two thousand cities worldwide are now enrolled in a United Nations global campaign engaging as many local governments as possible to take on the challenge of integrating disaster risk management into their development processes.