The United Nations Integrated Stabilization Mission in Mali (MINUSMA) has condemned the attack on its peacekeepers near the Kidal airstrip this morning, when one of its vehicles struck an explosive device.

“Seven Senegalese peacekeepers were wounded and have been evacuated,” UN spokesperson Farhan Haq told the daily press briefing at UN Headquarters in New York this afternoon.

According to MINUSMA, the area of the explosion has been secured and a team of experts from the Mission has started an investigation.

The UN is calling on all those involved in the peace process to respect the commitment they made last September in Algiers to prevent attacks against peacekeepers. Those responsible for these acts must be brought to justice, the Mission added.

This attack is the latest in a recent spate of violence targeting UN peacekeepers. On Sunday, eight “blue helmets” were wounded in the Gao region of north-eastern Mali when their vehicle was struck by an explosive device.

Briefing the Security Council last week, the Under-Secretary-General for UN Peacekeeping Operations, Hervé Ladsous, appealed to all parties to resolve outstanding issues in the fresh round of talks scheduled for February.

While talks held so far had resulted in a draft peace agreement that all parties were currently examining, he pointed to an “extremely volatile” security situation in the North of the country, with “serious fighting” taking place in recent days, including an attack on Malian troops in the Ségou region, where 10 were killed, and disturbances in Gao where three were killed.

“The situation on the ground remains difficult [with] each side trying to escalate,” he said, pointing out that MINUSMA forces had been deployed in response to the violence, facing a situation that was “very dire and costly” for MINUSMA’s troops.

“No Mission has been as costly in terms of blood,” he said, noting that a total of 33 MINUSMA soldiers had been killed and 109 injured and pointing out that the Mission’s peacekeepers face assaults on a virtually daily basis, in the form of rocket attacks on bases and targeted attacks with improvised explosive devices.

He called on all parties to respect the ceasefire and to show good faith, both on the ground and at the negotiating table in Algiers. That required some parties to accept the need to move from their opening positions, something not everybody had done. 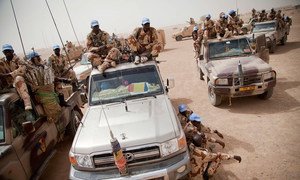 The United Nations Mission in Mali (MINUSMA) strongly condemned today’s rocket attack on its camp in the northern city of Tessalit.