UN Photo/Evan Schneider
Permanent Observer of the State of Palestine to the UN Riyad Mansour (right) speaks to the press.
2 January 2015

The documents – for accession to conventions and treaties for which the UN Secretary-General performs depositary functions – are being reviewed with a view to determining the appropriate next steps, according to a note issued to the media by a UN spokesperson.

The original versions of the documents were delivered yesterday to the UN Deputy Special Coordinator for the Middle East Peace Process, James Rawley, in Ramallah.

“This is a very significant step […] to seek justice through a legal option,” Riyad Mansour, Permanent Observer of Palestine to the UN, told reporters in New York after he transmitted copies of the documents to the UN Secretariat.

The Palestinian Government has confirmed that it will seek retroactive action against Israel at the ICC, which is based in The Hague, for alleged crimes committed by Israel in Gaza last summer. Nearly 2,200 Palestinians and 70 Israelis died during the 50-day conflict that ended in August.

Mr. Mansour said the request was made to the ICC on Thursday. “We delivered last night a letter to the Office of the Registrar in The Hague requesting retroactivity with regard to the crimes committed during the last war in Gaza and reserving our right for other retroactive crimes committed by Israel.” 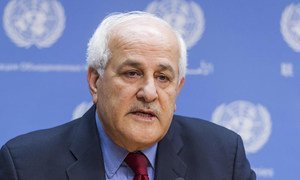 The United Nations confirmed today that Palestinian Authority officials have presented letters for accession to 15 international conventions and treaties.