FAO/Fazil Dusunceli
banana plant affected by the deadly Fusarium wilt disease among a field of healthy plants in the Philippines.
23 December 2014

Without global efforts to respond to a fungal disease affecting banana production, the $36 billion global industry, which provides a source of income or food to some 400 million people around the world, is under threat, according to the United Nations Food and Agriculture Organization (FAO).

The agency and its partners said $47 million is needed to tackle the new and deadly Tropical Race 4 (TR4) strain of Fusarium wilt disease, part of which would be used to provide swift on-the-ground assistance to countries facing new outbreaks.

“Fusarium wilt disease has been a major challenge in the history of banana production,” said FAO’s head of Plant Protection, Clayton Campanhola, at a meeting of experts at FAO headquarters in Rome last week. “After the devastation TR4 recently caused to bananas in parts of Asia, we have to fear its spread in Africa and the Middle East and also to Latin America, and consider it as a threat to production globally.”

Fusarium wilt disease, colloquially known as Panama Disease, brought Indonesia's banana exports of more than 100,000 tonnes annually to a grinding halt, causing annual losses of some $134 million in revenue in Sumatra alone. Currently, the disease is severely affecting more than 6,000 hectares in the Philippines and 40,000 hectares in China, FAO said in a news release issued today.

Following a case in Mozambique in December, which prompted an emergency intervention from FAO, the agency and a group of international experts agreed on a framework for a global intervention-and-prevention programme that would work to prevent outbreaks, manage existing cases and strengthen international collaboration and coordination.

Supporting ongoing research, educating producers and assisting governments in developing country-specific policies and regulation for prevention of the disease would be key aspects of the programme.

Fast responses are vital because of the speed with which the disease spreads and the damage it can cause. Once contaminated, an affected field becomes unfit for producing bananas susceptible to the disease for up to three decades.

In the early 1900s, the fungus spread across Latin America, causing over $2 billion in losses and nearly decimating the global banana export industry.

“Bananas are the world’s most consumed and exported fruit,” said Fazil Dusunceli, a plant disease expert with FAO’s Plant Protection Division. “With 85 per cent of all bananas being produced for domestic consumption, you can imagine the impact of this disease on food security and livelihoods in developing countries.”

♦ Receive daily updates directly in your inbox - Subscribe here to a topic.
♦ Download the UN News app for your iOS or Android devices.
FAO|disease 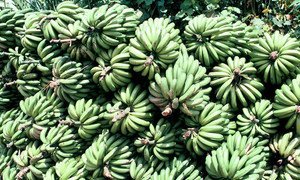