Courage of Ebola health workers should inspire greater efforts by all, says Ban

Citing the “memorable and moving” example of a Sierra Leonean nurse who had contracted Ebola but became a caregiver as soon as she had recovered, United Nations Secretary-General Ban Ki-moon said today that kind of commitment “should move us all to do more to end the outbreak” in West Africa.

Mr. Ban spoke to reporters at UN Headquarters upon his return from a trip to the region that took him to Guinea, Liberia, Mali, Sierra Leone and Ghana to ensure that “the UN response is a rapid, effective and comprehensive one.”

“Over the past few days, I witnessed immense suffering,” he stated. “Ebola is a terrible disease that denies the humanity of its victims and stigmatizes its survivors. But I also saw almost superhuman acts of kindness and support.”

The UN chief said he saw the progress being made and the slowing of the rate of transmission in many places.

“Where the strategy of isolation of the patients and treatment, contact tracing and safe and dignified burial is implemented, it is working,” Mr. Ban said. “Some areas that were once hot spots, such as Lofa County in Liberia, have been free of Ebola for weeks.”

He noted an “especially memorable and moving encounter” at a local Ebola Treatment Unit in Sierra Leone with a nurse named Rebecca Johnson, who contracted the disease, survived and then immediately became a caregiver again.

He also met other patients who proudly showed off their certificates stating that they were cured completely from Ebola.

A member of a social mobilisation team is talking to a family in Freetown, Sierra Leone, who is under quarantine after the loss of two family members to Ebola, including the husband of the woman sitting in the chair, 22 December 2014. UN Photo/Martine Perret

“Nurse Johnson’s commitment should move us all to do more to end the outbreak – and to stop the stigma that she and so many victims and caregivers face,” he said.

Mr. Ban outlined four steps as “especially urgent” to respond to Ebola, which the World Health Organization (WHO) said in its latest update released today is affecting 19,340 people and has so far killed 7,418.

“The outbreak is evolving, and so has our response,” he said, noting that instead of one outbreak spreading relentlessly from the epicentre, there are now dozens of isolated chains of transmission.

Also, noting that there is increasing emphasis on hunting the virus, he said: “We cannot afford to miss a single case.”

He went on to say that, “we must step up recovery efforts now” and said that he has asked the UN system, led by the UN Development Programme (UNDP), to plan the recovery for the region. “That means restoring essential services, getting children back in school, getting people back to work, rebuilding shattered economies and caring for thousands of orphans,” he said.

And lastly, the international community needs better early warning and rapid response. “I intend to engage Member States in a serious effort to explore what more we can do to stay ahead of the next outbreak of disease – a test that is sure to come,” he said.

But today, “our immediate goal is simple: zero cases.”

He once again stressed the need for more resources and help for the countries and people affected by Ebola – human resources, medical doctors and nurses and health workers, and financial support and equipment and logistical support.

Meanwhile, the UN Mission for Ebola Emergency Response (UNMEER) reported today that votes are being counted in Liberia's senate election held on Saturday and that turnout in the poll was low as many people decided to stay away. “Those who came to polling stations had their temperature taken, were told to stand a meter apart and wash their hands before and after voting.”

And the World Food Programme (WFP) said today that it is launching together with the China Foundation for Poverty Alleviation a public fundraising campaign with Tencent, which it described as one of the world’s largest internet companies, to raise funds to fight Ebola.

Funds raised from the campaign will go towards WFP’s emergency operations to meet basic food and nutrition needs of affected families and communities in the three countries worst impacted by Ebola –Sierra Leone, Liberia and Guinea.

Since the Ebola outbreak began earlier this year, WFP said it has provided food assistance to more than 2 million people and has supported the medical response through logistical services for the entire humanitarian community, including air transport of people and goods. 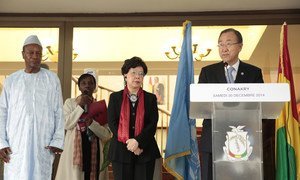 Cautioning that much remains to be done to wipe out Ebola in Guinea, United Nations Secretary-General Ban Ki-moon said today that joint national, regional and global efforts have “significantly” slowed the spread of the deadly virus, giving hope to thousands of people and providing space for communities to look ahead to socio-economic recovery.