FAO/Prakash Singh (file)
A fishing trawler damaged by the December 2004 tsunami under repairs at the Kudewella boat repair centre in Sri Lanka with assistance from FAO.
22 December 2014

Ten years after the Indian Ocean tsunami hit South and Southeast Asia, countries in the region are better prepared to deal with tragedies, the United Nations Food and Agriculture Organization (FAO) said today, while stressing that there is still room for improvement.

“A decade later, while events marking the remembrance of the tsunami recall the human tragedy, FAO examines the lessons learned in mitigating damage to agricultural livelihoods, food security and nutrition wrought by such natural and climatic events,” said Hiroyuki Konuma, FAO Assistant Director-General and Regional Representative for Asia and the Pacific.

“What we and our member countries have learned and now see in place is impressive, but there is still more that can and should be done to prevent and mitigate disasters,” he added.

The world's worst recorded natural disaster hit the Asia Pacific region in December 2004, claiming the lives of more than 200,000 people and leaving the livelihoods of some 1.4 million survivors in tatters as it destroyed entire food production systems on which whole populations depended.

Some of the countries worst affected by the Tsunami are now better prepared for disasters and better positioned to respond but a recent FAO-sponsored workshop with the Association of Southeast Asian Nations (ASEAN) stressed additional actions that are needed to further increase resilience to disasters, largely due to the effects of rapid population increases and urbanization, together with eroded natural resource bases and climate change.

Combining that need with the importance of effective early warning systems, the UN Economic and Social Commission for Asia and the Pacific (ESCAP) and the German Federal Ministry for Economic Cooperation and Development (BMZ) have partnered with the German Ministry contributing 250,000 euros to the ESCAP Multi-Donor Trust Fund for Tsunami, Disaster and Climate Preparedness to add to an initial 500,000 euros contribution made in December 2013.

“ESCAP welcomes the renewed support of the German Government to strengthen early warning systems,” said Dr. Shamshad Akhtar, UN Under-Secretary-General and ESCAP Executive Secretary. “Ten years after the 2004 Indian Ocean Tsunami, much has been achieved in strengthening resilience to disasters in the Asia-Pacific region; however, we need to continue to invest in preparedness and early warning, especially in high risk and low capacity least developed countries of the region.”

The German-ESCAP partnership is an example of the shift from reactive to proactive approaches, with the focus shifting from life-saving followed by recovery to anticipative, multi-hazard risk reduction with prevention and mitigation of natural disasters.

With 200 million people in Asia and the Pacific affected each year by a broad range of natural disasters between 2003 and 2013, and with the cost of those disasters averaging $34 billion each year between 2001 and 2010, the change in approach is essential.

Early disaster warning systems and clearly marked tsunami evacuation routes are evident in countries such as Thailand, which established a dedicated Government Department of National Disaster Prevention and Mitigation following the tsunami. In the Cambodian capital, Phnom Penh, flood protection dykes have been built and there is a nationwide early warning system for flooding.

“It's clear that many countries in the region are now better prepared to reduce the risks and mitigate the damage of natural disasters such as tsunami and typhoons and protect their agriculture and food systems,” said Mr. Konuma. “The most recent example is Typhoon Hagupit that struck the Philippines earlier this month, where the authorities' early warnings to farmers and fishers to take pre-emptive action helped ensure that the damage would be far less severe than a year earlier when Typhoon Haiyan ripped through the centre of the country.” 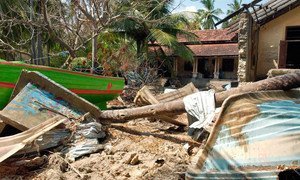