The United Nations Security Council has strongly condemned the recent resurgence of violence in the Central African Republic (CAR) and reiterated its appeal to all parties to the conflict to “immediately and permanently” lay down their arms, release all children from their ranks, and embark upon the path of dialogue as the only viable means towards achieving lasting peace.

In a statement presented by Moussa Faki Mahamat, Minister for Foreign Affairs and African Integration of Chad, which holds the body's December presidency, the Council condemned “the continuous cycle of provocations and reprisals by armed groups, both inside and outside of Bangui; the threats of violence, human rights violations and abuses and international humanitarian law violations committed by armed elements”.

The 15-member Council also reiterated its grave concern at the threat to peace and security arising from the illicit transfer, destabilizing accumulation and misuse of small arms and light weapons. It also underlined that attacks targeting peacekeepers may constitute war crimes under international humanitarian law.

It urgently appealed to the international community to mobilize additional resources, noting that a total amount of $321 million is still required to cover the needs identified within the framework of the 2014 CAR Strategic Response Plan and Regional Refugee Response Plan, to alleviate the humanitarian crisis.

The Council stressed that the restoration of lasting peace and stability in the CAR is contingent upon economic recovery, with concrete prospects for youth employment. In this context, the Security Council welcomed employment generating projects.

Council Members reiterated the important role of UN Multidimensional Integrated Stabilization Mission in the CAR (MINUSCA) in providing support for security sector reform and commended the work of the Special Representative of the Secretary-General Babacar Gaye.

In that regard, the Council urged the Secretariat and MINUSCA to accelerate the deployments of its civilian, police and military capabilities in CAR, in order to reach its full operational capacity as soon as possible.

The Council also took note of the final communiqué of the High-level meeting on the Central African Republic (CAR) held under the auspices of the Secretary-General in New York on 26 September 2014 as well as conclusions of the 6th meeting of the International Contact Group on the CAR held in Bangui on 11 November 2014.

Members also urged all actors of the electoral process, including the Transitional Authorities and the National Elections Authority (NEA), to accelerate preparations in order to hold free and fair presidential and legislative elections that allow for the full and equal participation of women, internally displaced persons, and CAR refugees, no later than August 2015.

Meanwhile, signatories to the Brazzaville Agreement on Cessation of Hostilities of 23 July 2014 must fully implement its provisions, in particular articles 4 and 8, the Council reiterated, calling on the International Mediation, led by President Denis Sassou N'Guesso, the Economic Community of Central African States (ECCAS), the African Union (AU), and the UN to facilitate the early conclusion of an agreement on the disarmament of the armed groups.

Affirming that those responsible for violations of international humanitarian law must be held accountable, the Council noted the opening by the Prosecutor of the International Criminal Court (ICC) on 24 September 2014 of an investigation on alleged crimes committed since 2012 and welcomed the ongoing cooperation by the CAR Transitional Authorities in this regard.

It also welcomed the signing on 7 August 2014 of the Memorandum of Understanding (MoU) on Urgent Temporary Measures, which describes, in particular, the establishment of a national Special Criminal Court in charge of investigating and prosecuting the serious crimes committed in CAR and called for the immediate implementation of this MoU.

Members reiterated its appreciation to neighbouring countries for hosting approximately 420,000 CAR refugees and called on Transitional Authorities, humanitarian personnel and all relevant actors to establish favourable conditions for the voluntary and dignified return of internally displaced persons (IDPs) and refugees

The international community must continue to support Central African Republic and provide urgent financial contributions to support national dialogue and reconciliation as well as the restoration of the judicial and penal chains in order to fight against impunity, the Council stated. 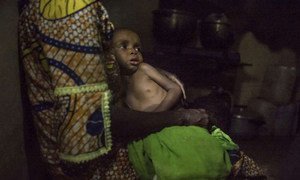 Two out of five children urgently needing humanitarian aid in Central African Republic are without it, thanks to a critical lack of funding and continued conflict, a year after extreme violence tore through the country, the UN Children’s Fund (UNICEF) has said today.