UN Photo/Evan Schneider
A view of the destruction caused by the Indian Ocean tsunami of 26 December 2004 in Point Pedro, a small fishing village in northern Sri Lanka.
18 December 2014

Published by the UN Economic and Social Commission for Asia and the Pacific (ESCAP), the annual report showed that disaster-induced deaths in the Asia-Pacific region rose more than three-fold between in the past decade, largely due to a handful of extreme disasters.

Among the Asia-Pacific sub-regions, Southeast Asia – predominantly Indonesia and the Philippines – was hardest hit by natural disasters that killed more than 350,000 in more than 500 incidents, according to the report. During the same period, the number of natural disasters occurring in China alone was more than twice as high as that in the whole North and Central Asia.

“Indeed, this three-fold increase in the number of deaths was largely attributed to the effects of only a handful of catastrophic disasters, including the 2004 Indian Ocean earthquake and tsunami, the 2005 Kashmir earthquake in Pakistan, the 2008 Sichuan earthquake in China and Cyclone Nargis in Myanmar, as well as the 2010 heatwave in the Russian Federation,” it said.

“During the period between 2004 and 2013, natural disasters in Asia and the Pacific caused economic damage of over $560 billion, of which 85.5 per cent was accounted for by 28 upper-middle-income and high-income economies,” the yearbook said. “Nonetheless, in terms of GDP [Gross Domestic Product], low-income economies suffered more from natural disasters.”

The findings also showed that not all are benefiting from economic growth.

Although one billion people escaped extreme poverty since 1990 in Asia and the Pacific and the prevalence of undernourishment has also decreased from 22 per cent to 13 per cent, more than 700 million people in the region still remain in extreme poverty, the report showed.

Asia and the Pacific accounts for more than 60 per cent of the world’s hungry people with 933 million people living on between $1.25 and $2 a day, it noted.

“A small shock to their lives due to such factors as personal mishaps or economic crises could push these people into abject poverty (below the $1.25-a-day line),” according to a press release on the report. “Inequality has also risen in nearly half the countries in the region for which data are available.”

The Statistical Yearbook for Asia and the Pacific presents analyses highlighting major achievements and challenges for 58 countries in promoting economic prosperity, social inclusion and environmental sustainability. It is accompanied by a series of online products, including country fact sheets, a database containing over 600 indicators and data visualization options.

“The proposed 17 goals with 169 targets of the framework cover a broad range of goals and targets of sustainable development, raising demands for data for the purpose of monitoring,” he was quoted in the press release as saying. 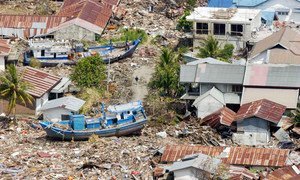 A decade after the Indian Ocean tsunami struck, the Asia-Pacific region remains highly disaster prone and critical gaps remain in early warning, especially in reaching the most vulnerable people and remote communities, the United Nations Economic and Social Commission for Asia and the Pacific (ESCAP) said today.