Ban Ki-moon hails decision by US, Cuba to normalize relations

UN Photo/Loey Felipe
A view of the electronic tally of the result of the vote as General Assembly adopted for the twenty-third consecutive year a resolution calling for an end to the United States’ economic, commercial and financial embargo on Cuba, 28 October 2014.
17 December 2014

United Nations Secretary-General Ban Ki-moon today welcomed the “very important step” taken by the leaders of the United States and Cuba towards normalizing relations between the two countries.

Presidents Barack Obama and Raúl Castro of Cuba reportedly agreed in a telephone call to put aside decades of hostility. Media reports say that, as part of a deal negotiated over a period of 18 months, the US will restore full diplomatic relations with Cuba and open an embassy in Havana for the first time in more than 50 years after the release of an American contractor held in prison for five years.

“I’d like to thank President Barack Obama of the United States and President Raúl Castro for taking this very important step towards normalizing relations.”

Mr. Ban, who said he was informed in advance of the deal by the US Government, hoped today’s announcement will help to further expand exchanges between the people of the two countries.

Later in the day, Sam Kutesa, President of the UN General Assembly also welcomed the announcement by the US and Cuba on their intention to normalize bilateral relations.

In a statement attributable to his spokesperson, Mr. Kutesa congratulated both countries and encouraged them to make every effort to pursue areas of mutual interest and address obstacles that have impeded productive diplomatic relations.

He underlined that today’s announcement is a positive step towards ending the economic, commercial and financial embargo imposed by the US against Cuba, and in line with the General Assembly resolution 69/5.

For 23 consecutive years, the UN General Assembly has adopted resolutions calling for an end to the US economic, commercial and financial embargo on Cuba. While the deal announced today does not mention changes to the embargo, Mr. Obama has reportedly expressed willingness to discuss lifting the sanctions. 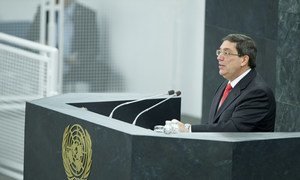 For the 22nd consecutive year at the United Nations, the General Assembly today adopted a resolution calling for an end to the economic, commercial and financial blockade imposed by the United States against Cuba.