Lebanon: UN deputy chief pledges to ‘help as much as possible’ with refugee impact

WFP/Sandy Maroun
A Syrian refugee family in an informal tented settlement in Jdita town Bekaa Valley, Lebanon, where nearly 35 other families have lived for more than three years, after fleeing the war in Aleppo.
15 December 2014

With soaring numbers of refugees seeking asylum in Lebanon, United Nations Deputy Secretary-General Jan Eliasson today pledged to “help as much as possible” to ensure that the tragic conflict in Syria will not spread into Lebanese society.

Meeting with the Speaker of the Lebanese Parliament Nabih Berri in Beirut, Mr. Eliasson said that his visit to the Middle Eastern nation comes at a “very crucial” time.

“I was here two years ago and the numbers of refugees were less than 150,000 and now we have almost ten times that number and we understand fully the strains that this has on the Lebanese society,” Mr. Eliasson explained.

He commended Lebanon for its generosity in receiving such great numbers of refugees but also underscored the considerable consequences for communities in terms of strains on health, schools and jobs.

Mr. Eliasson also met with the Prime Minister at the launch of the Lebanese Crisis Response Plan which is focused on supporting refugees and giving support to Lebanese communities.

“For us, this reflects the basic belief that the security and integrity of Lebanon is a priority for the region and for the world. And we stand by and we will try to help as much as possible that the tragic conflict in Syria will not spread into Lebanese society,” he added.

Mr. Eliasson outlined that he was working closely with the International Support Group for Lebanon which also aims to help reinforce the Lebanese Armed Forces (LAF) as a stabilizing and unifying force. Both Speaker Berri and Lebanese Army Commander General Jean Kahwagi spoke very positively about the cooperation between the LAF and UN Interim Force in Lebanon (UNFIL).

“We hope very much that the United Nations will be seen by your people as a partner both in dealing with the huge refugee problem but also in helping support and build Lebanese communities in these moments of strain,” the Deputy Secretary-General said.

“We hope also in the end that we will also see a political solution. We must go to the root causes of the problem,” he said, emphasizing the role of UN Special Envoy for Syria Staffan de Mistura in pursuing a peaceful outcome.

Mr. Eliasson also thanked the UN Special Coordinator for Lebanon Mr. Derek Plumbly, who served in the country for almost three years and will be replaced by Ms. Sigrid Kaag. 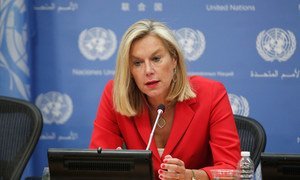