A special report detailing the global results of the “MY World” survey was launched at United Nations Headquarters on Friday in a special ceremony hosted by the UN Millennium Campaign and the Secretary General’s Special Envoy for Youth Mr. Ahmad Alhendawi.

The We the Peoples: Celebrating 7 Million Voices report presents the global results of MY World, the UN survey for a better world, which was developed in response to the Secretary-General’s call for “the most inclusive development agenda the world has ever seen”.

“Over 70 per cent of ‘MY World’ voters are younger than 30, indicating how committed young people are to imagining and creating a better future,” said UN Youth Envoy Mr. Ahmad Alhendawi who presented the report this past Friday at a special event at Headquarters.

To date, MY World is the largest survey ever undertaken by the United Nations in its 70-year history, having reached over 7 million people all over the world.

It asks citizens all over the world to vote for the six out of 16 issues which are most important to them and their families – from better healthcare to clean water and sanitation, to freedom from discrimination. Those priorities are visualized on an open data site, where the priorities can be disaggregated by gender, age, education, HDI level, and country.

“The findings of this report are crucial inputs to the new development agenda, which is to be decided by member states in September 2015,” noted UN Deputy Secretary-General Jan Eliasson.

Corinne Woods, Director of the UN Millennium Campaign, said the report details how the results of the MY World survey reveal important trends for the post-2015 development agenda.

“The existing Millennium Development Goals (MDGs) continue to be important, but we also see new issues which people prioritize highly, such as an honest and responsive government, protection from crime and violence, and better job opportunities.”

“We need a paradigm shift and a coming together. MY World results show there is more that unites us than divides us. Working together we can be the generation that ends poverty and preserves the planet,” added Ms. Woods.

The MY World global survey will continue to collect votes until the adoption the new UN Sustainable Development Agenda in September 2015.

Friday’s event showcased not only the data from these 7 million voices, but also some of the personal stories behind them which were gathered during the recent Humans of MY World global tour. These narratives were performed by emerging young actors. 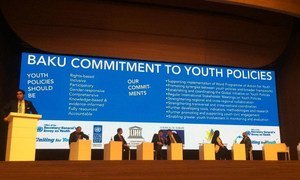 The United Nations-backed Global Forum on Youth Policies, which brought together over 700 participants from over 165 countries, concluded in Azerbaijan today with the launch of an outcome document pledging to support countries that are in the process of developing and “elevating” national youth policy.