WFP/Lisa Bryant
Nyaman Joak, 35, with 16-month-old Boum at Ethiopia's Pagak entry point, waiting to be registered as a refugee. It took 10 days for Joak to walk here from her home in South Sudan's Upper Nile state. Three of her children died in the fighting, and she doesn't know where her husband is.

14 December 2014
One year since conflict broke out in South Sudan and the country's warring factions have yet to reach a comprehensive peace agreement, endangering the lives of millions of people and the future of the world's youngest nation, United Nations Secretary-General Ban Ki-moon has warned.

“The killing must stop now. The very premise of the country's independence struggle - a new beginning that was supposed to be founded on tolerance, good governance, accountability and unity - is disappearing before our eyes,” Mr. Ban said in a statement released through his spokesperson's office.

“I am dismayed and saddened that the parties have yet to reach a comprehensive peace agreement,” he continued. “The leaders of South Sudan have allowed their personal ambitions to jeopardize the future of an entire nation.”

South Sudan has experienced several bouts of violence over the past few months, including an incident in which the UN base in Bentiu came under fire resulting in the wounding of one child. Meanwhile, a prior attack caused hundreds of people to seek shelter at the nearest airport. Approximately 340 civilians took shelter with UN Mission in South Sudan (UNMISS) troops, and then were escorted to safety.

Political in-fighting between President Salva Kiir and his former deputy, Riek Machar, started in mid-December 2013 and subsequently turned into a full-fledged conflict that has sent nearly 100,000 civilians fleeing to UNMISS bases around the country. The crisis has uprooted an estimated 1.9 million people and placed more than 7 million at risk of hunger and disease.

Just last week, the UN Children's Fund warned that an entire generation of South Sudanese children was at risk of being “stolen” by the year-long conflict. To date, almost 750,000 children have been internally displaced, with 320,000 more living as refugees.

In addition, UNICEF says that approximately 400,000 children were missing school, 12,000 reported as being used by armed forces and groups, and children were subject to violence, malnutrition and disease.

Mr. Ban called on the leadership of both factions to agree to “an inclusive, power sharing arrangement” and begin a transitional phase of governance that would address “the root causes of the conflict and ensure accountability for the crimes committed over the past year.”

“They must end the culture of impunity if reconciliation and a sustainable peace are to be achieved,” the statement added.

“I call on the international community to put its collective weight behind the peace process led by the Inter-Governmental Authority on Development and I commend the African Union Peace and Security Council for creating a Heads of State ad-hoc committee for this purpose. The United Nations will remain fully engaged in support of the peace process, the protection of civilians and the provision of humanitarian assistance.” 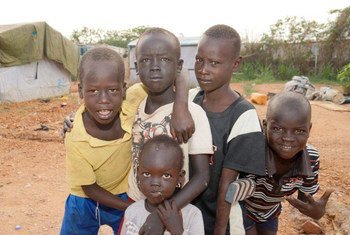 12 December 2014
The scale of the crisis facing children in South Sudan is “staggering” according to the United Nations Children’s Fund (UNICEF), which warned today that the future of an entire generation of the country’s children was being “stolen” by the year-long conflict.