The United Nations Relief and Works Agency (UNRWA) in Gaza, has declared an emergency in Gaza City, following extreme weather and severe flooding over the past 48 hours exacerbating the already poor humanitarian situation in the enclave, which is dealing with the aftermath of a last summer's conflict, and an acute fuel and energy crisis.

“We are particularly concerned for those families still seeking adequate shelter and preparing for the winter months, and for the impact the flooding is already having on children unable to attend school,”said UNRWA's Director of Operations Robert Turner in Gaza on Thursday.

No casualties or injuries have been reported, but hundreds of residents in the flooded areas around the Sheikh Radwan storm water lagoon have evacuated their homes. One UNRWA school and an UNRWA Collective Centre in Gaza City have been affected by the rising waters.

As the largest UN agency in the Gaza Strip, UNRWA supplies emergency fuel to municipalities, water, sanitation and health facilities, partially through the WASH and Health clusters led by UN Children's Fund (UNICEF) and the World Health Organization (WHO).

On Thursday, UNRWA provided 60,000 litres emergency fuel supplies to run back-up generators of pumping stations and portable pumps. The Agency is also prepared to provide adequate shelter to internally displaced refugees and others should there be a need.

A coastal enclave, Gaza City is one of five areas in the Gaza Strip where UNRWA serves some 1.3 million Palestine refugees. Of the 18 UNRWA Collective Centres, 5 are in Gaza City and currently provide adequate shelter for some 7,000 people displaced by the recent conflict.

As a precautionary measure, many schools in Gaza City were closed on Thursday, affecting almost 65,000 students. Forty-three schools in the North Area of the Strip were also closed. Other UNRWA installations are being assessed, though no damage has yet been reported.

UNRWA is in close consultation with all of its partners, the Palestinian Government and the local municipality who are monitoring the level of rain across the Strip.

The devastation that extreme weather can cause is not new for Palestinian families in Gaza. In December 2013, the fiercest winter storm the region has seen for many years, Alexa, hit the Strip, and brought torrential rains and widespread flooding that displaced thousands.

Established by a General Assembly resolution in 1949, UNRWA is mandated to provide assistance and protection to a population of some 5 million registered Palestine refugees in Jordan, Lebanon, Syria, West Bank and the Gaza Strip. 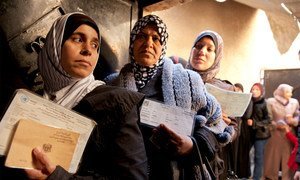 The plight of Palestine refugees from Syria in the Middle East is becoming increasingly grave caused by closed borders and a series of forced returns from neighbouring countries, Chris Gunness, spokesperson for the United Nations Relief and Works Agency (UNRWA) said today.