The Security Council today extended the mandate of the United Nations Integrated Peace-Building Office in Guinea-Bissau, known as UNIOGBIS, so that it can continue to assist in tackling a range of political, security and development challenges in the country.

UNIOGBIS’ mandate was extended for a period of three months, beginning on 1 December 2014 until 28 February 2015. This past May, the Council agreed to extend the mission’s mandate until 30 November.

Specifically, UNIOGBIS will focus on, among other tasks, supporting an inclusive political dialogue and national reconciliation process to facilitate democratic governance, and assisting in strengthening democratic institutions and enhancing the capacity of State organs to function effectively and constitutionally.

The Office will also continue to provide strategic and technical advice and support for the establishment of effective and efficient law enforcement and criminal justice and penitentiary systems, as well as advice and support to implement the reform of the national security sector.

The Council also reiterated its deep concern at the threat to stability posed by drug trafficking, emphasizing the need to tackle the problem in the countries of origin, transit and final destination.

Among other measures, the Council called upon the authorities of Guinea-Bissau to review, adopt and implement national legislations and mechanisms to more effectively combat transnational organized crime.

In addition, in the resolution the Council also requested that the Special Representative of the Secretary-General, Miguel Trovoada, increase efforts to achieve “greater coherence, coordination and efficiency” among relevant UN agencies, funds and programmes in Guinea-Bissau to maximize their collective effectiveness towards combating drug trafficking.

Earlier this year, the West African nation concluded a second round of presidential elections, which are widely seen as essential to restoring constitutional order, economic growth and development following a 2012 military coup. 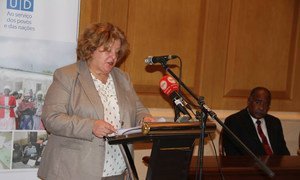