UNAIDS
Executive Director of UNAIDS, Michel Sidibé (2nd right) and the Director-General of the World Health Organization, Margaret Chan (right) on a visit to Mali in a joint mission to support the country in its efforts to curb the spread of Ebola.
24 November 2014

The Executive Director of Joint United Nations Programme on HIV/AIDS (UNAIDS), Michel Sidibé and the Director-General of the World Health Organization, Dr. Margaret Chan, have visited Mali in a joint mission to support the country in its efforts to curb the spread of Ebola, as authorities there announced one new case and that two more suspected patients were being tested.

“The next 15 days are critical for ending Ebola in Mali,” where at least 5 people have died from the virus, UNAIDS said in a press release issued today. “The coordination of action and strategic communication are key to success, as are immediate international funding and technical assistance.”

The UN is ramping up support on many fronts to support both the preparedness and response efforts of the Malian Government, including with the announcement on Friday by Secretary-General Ban Ki-moon that the UN Mission for Ebola Emergency Response (UNMEER) would establish an office in the country. That office is scheduled to formally open an office in Mali on Wednesday.

The joint UNAIDS-WHO mission was to peruse in-depth discussions on how the United Nations system can eradicate the epidemic and prevent further outbreaks.

“In the past few weeks, Mali has responded quickly to find people who came into contact with someone infected with the disease,” Dr. Chan said in a press release.

“This rapid response was essential to prevent the disease from spreading. It is vital right now that WHO and all other UN organizations working in Mali support the Government in maintaining this strong response until we are certain this outbreak is contained.”

The visit occurred as the Malian Government reported a new case of Ebola and said two more suspected patients were being tested. At least five people have died from Ebola in Mali already, and the country has been working diligently to trace several hundred contacts of the recent Ebola cases to prevent extensive spread of the disease in the country.

Mr Sidibé tweeted: “I applaud Mali President's decision to keep borders open. Closing would add an economic & social crisis to the health one.”

Together with the Malian Minister of Health, the delegation also visited an Ebola treatment centre in Bamako run by Médecins Sans Frontières, where an Ebola patient is being treated. They later met with civil society representatives, religious leaders and health workers.

Dr. Chan also met with the Centre for Vaccine Development where a vaccine against the virus is currently in the first phase of human testing and with other UN agencies and civil society groups working in communities to prevent the spread of Ebola.

To date, WHO has reported 15,351 Ebola cases in eight countries since the outbreak began, with 5,459 reported deaths. Mali, previously free from the virus, is the latest country to register Ebola cases, six in total, all of which have been fatal.

Also on Ebola, the UN Children’s Fund (UNICEF) said it was delighted to report that their colleague who has been receiving treatment at a hospital in France has made a full recovery and is now back at home in Sierra Leone.

UNMEER reported that Germany was to donate 400 motorbikes as part of its Ebola response so that blood samples can be brought to labs quicker.

The UN World Food Programme (WFP) reported that more than 100 pallets of humanitarian cargo were offloaded in Sierra Leone, and from Monrovia, the UN mission in Liberia (UNMIL) reported that 40 WFP trucks had arrived. WFP has been given the job of coordinating logistics for the entire humanitarian community involved in the Ebola response. 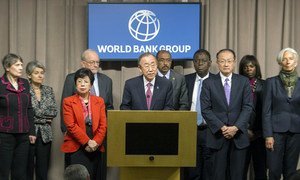 Ebola: Ban hopeful of outbreak’s end by mid-2015; UN to set up response office in Mali

Secretary-General Ban Ki-moon today said that by continuing to scale up the global fight against Ebola, there is hope the outbreak could be contained by mid-2015, but he emphasized that results to date are still uneven, and announced that the Organization’s top health officials will head to Mali, where the situation is still a cause of "deep concern.”