MONUSCO/Sylvain Liechti
A member of FIB stands guard in the Beni region of the Democratic Republic of the Congo (DRC) where the UN backed the FARDC in an operation (March 2014).
24 November 2014

The security situation in the eastern Democratic Republic of the Congo (DRC) is “worsening,” a senior United Nations official has warned, citing an escalating trend of massacres in the town of Beni – the site of continuing flare-ups of deadly violence between armed groups, including Ugandan-based rebels operating in the area.

The situation in the town has been steadily deteriorating over the past few weeks amid a spate of attacks in which over 100 civilians, mostly women and children, have been killed, according to UN reports.

Saïd Djinnit, UN Special Envoy for the Great Lakes Region, strongly condemned the massacres in a press release today while calling on the local authorities to continue their efforts in arresting and prosecuting those responsible.

“Those behind these massacres should be brought before justice and held accountable,” Mr. Djinnit declared.

In early November, more than 200 people were arrested in operations carried out by the National Police and the police forces of the UN satbilization mission in the country, known as MONUSCO, while UN mission forces also began an intensification of their patrols in the region. Nevertheless, the threat to civilians remains high.

In his statement, Mr. Djinnit urged armed groups active in the restive eastern DRC to “disband permanently” and warned those providing them with support of possible sanctions. In addition, he expressed his full support for MONUSCO’s increased cooperation with the Congolese Armed Forces (FARDC) to reign in the rebels.

To that point, in his briefing of the Security Council in New York last month, the Secretary-General’s Special Representative for the DRC and the head of MONUSCO, Martin Kobler, underlined the need for a “proactive, not reactive” response in countering the country’s rebel groups and boosting protection for civilians.

“The worsening situation in the Beni area and beyond requires a decisive action towards neutralizing all negative forces in the DRC, as per the decisions of the regional leaders and the UN Security Council,” Mr. Djinnit continued, adding that the continuing violence risked destabilizing the tenuous peace process established by the Peace, Security and Cooperation Framework for the DRC and the region.

“The persistence of negative forces contributes to perpetuating mistrust at a time when the Great Lakes countries are expected to move away from their differences and tragedies of past towards building a common peaceful and prosperous future.” 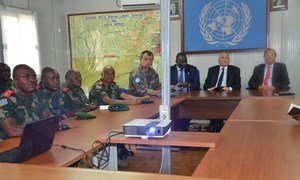 Visiting the site of a recent flare-up of deadly violence in eastern Democratic Republic of the Congo (DRC), United Nations and African Union (AU) envoys met with the Mayor of the town of Beni, Congolese military officials and local leaders, urging a united front to “put an end to the terror imposed on the population by armed groups,” including Ugandan-based rebels operating in the area.