The technological advancement of the television medium – a critical tool for “informing, channelling, and affecting” public opinion – is necessary for the improvement of communication and globalization, the United Nations International Telecommunications Union (ITU) declared today, as it announced new measures aimed at heightening television viewing for millions of people around the world.

“ITU is currently working on developing new standards that will dramatically enhance the television viewer’s experience, in terms of both visual and audio quality,” ITU Secretary-General Hamadoun I. Touré said in a press statement marking the annual observance of World Television Day.

“ITU is developing industry-leading standards for the next generation of television that will be available in very high definition as well as high performance dynamic video streaming.”

The UN agency’s work on television standards will pave the way for a new generation of televisions boasting four times the detail of current commercial Ultra High Definition Television, or UHDTV, and producing “a super wide range of contrast to the television image, bringing it closer to the real world,” the ITU press release explained.

In addition, an updated standard of High Efficiency Video Coding (HEVC), introducing measures aimed at improving video quality, reducing network congestion and easing the burden on bandwidth use, is expected to “unleash a new phase of innovation in video production.”

“ITU is striving for good and efficient future use of the radio-frequency spectrum to carry television broadcasting,” said Christoph Dosch, Chairman of ITU-R Study Group 6, which deals with broadcasting issues.

“In order to continue to develop new and high-performance television standards, it is critical that we retain the currently used television spectrum which provides great value to the information society.”

The ITU’s new iteration of television standards also aims to make television more accessible for those with special needs and disabilities through subtitles and audio channels describing the action in the image, as well as future options such as the capacity of the viewer to separate foreground and background sound, allowing the audio to be more intelligible to those with hearing disabilities.

With audio-visual media pervading nearly every aspect of modern life, the agency’s work in improving the accessibility of television to persons with special needs remains “crucial in building an inclusive Information Society,” the ITU continued.

The ITU’s latest announcement coincides with the 2014 edition of World Television Day, proclaimed by the UN General Assembly in 1996 in recognition of the increasing impact television has on global decision-making through its sharpened focus on international issues and current events. The Day is observed annually on 21 November.

“World Television Day is not so much a celebration of the tool, but rather the philosophy which it represents,” notes the UN. “Television represents a symbol for communication and globalization in the contemporary world.” 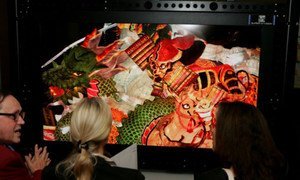