Low agricultural productivity continues to threaten food security in Africa as a whole. And while many African economies have shown impressive growth rates in recent years, increased prosperity does not always translated into inclusive wealth creation.

“Far too often, economic development depends on the extraction of natural resources and on low-skilled labour, which has resulted in a weak manufacturing base and uneven distribution of wealth,” the Secretary-General said.

Inclusive and sustainable industrialization is a “key stepping stone” towards sustained economic growth, food security and poverty eradication in Africa, he added.

“I reaffirm the commitment of the United Nations to promote Africa's inclusive and sustainable industrial development to help ensure an economically prosperous and socially integrated continent,” he pledged.

In his remarks on the Day, President of the General Assembly Sam Kutesa, a native of Uganda, explained today that accelerating industrialization in Africa goes hand-in-hand with improving productivity and addressing infrastructure deficits, namely in energy, roads, ports and air connectivity.

“While remarkable progress has been made in production…a lot of the surplus is often wasted due to lack of processing capacity and marketing,” Mr. Kutesa said.

In recent years, throughout the continent, agriculture has moved to the forefront of the development agenda at both the regional and national levels. The Africa Union Agenda 2063 lays out a 50-year transformative plan for the modernization of agriculture and agro-business through scaled-up value addition and productivity.

Mr. Kutesa underscored that investments in agriculture must go beyond improvements of on-farm productivity. He emphasized that inventions with the private sector are essential in designing and creating industries, jobs and increasing incomes.

Enhancing cooperation and integration among stakeholders is also essential, as it facilitates better mobilization of resources for infrastructure development, he added.

Within the framework of the Second Industrial Development Decade for Africa (1991-2000), the UN General Assembly, in 1989, proclaimed 20 November Africa Industrialization Day (resolution 44/237).

Commemorating the Day, the UN Industrial Development Organization (UNIDO) will host a symposium in Vienna on 24 November to showcase relevant actions and success stories that promote Africa's industrial development.

The event will bring together representatives from the diplomatic corps, the private sector, non-governmental organizations and other relevant stakeholders. 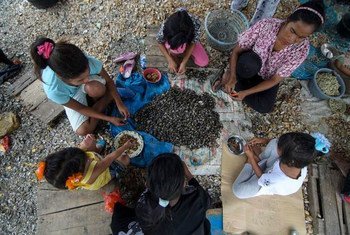 17 November 2014
While the majority of countries around the world are expected to cut public expenditures in 2015 and beyond, others will be moving in the opposite direction to expand social protection measures, says a new policy paper released by the International Labour Organization (ILO) today.