Preventing a further escalation of tensions in the Israeli-Palestinian conflict and returning to negotiations has never been more important, a senior United Nations political official told the Security Council today, calling on leaders from both sides to make the “difficult compromises” that will promote stability and ensure long-term security in the region.

Briefing the Council on the situation in the Middle East, Jens Anders Toyberg-Frandzen, Assistant Secretary-General ad interim for UN Political Affairs, stressed that Secretary-General Ban Ki-moon is alarmed by the rise in tensions – particularly attacks against religious sites – that has continued since the Council’s emergency session of 29 October.

“The Secretary-General has expressed his deep concern about the upsurge in violence and calls on all sides to do everything possible to avoid further exacerbating an already tense environment,” Mr. Toyberg-Frandzen said.

“The continued reality of the close to 50-year long occupation and the lack of progress towards the two-State solution ensure that the next round of violence is never too far below the surface. The time has come for leaders on both sides to make the difficult compromises that will promote stability and ensure long-term security for both Israelis and Palestinians,” Mr. Toyberg-Frandzen added.

Clashes between Palestinian youths and Israeli security forces in many parts of East Jerusalem and the West Bank have been taking place on an almost daily basis, and escalating tensions surrounding access to holy sites have contributed significantly to the spike in violence. Violence has also spread elsewhere in Israel and the West Bank, Mr. Toyberg-Frandzen noted.

He said that incidents have included Israeli police shooting and killing an Israeli Arab man in the village of Kafr Kanna in northern Israel on 8 November, alleging that he had threatened them with a knife. On the same day, thousands of people reportedly protested the killing, leading to clashes with police in the village. On 10 November, an Israeli soldier in Tel Aviv and an Israeli woman in the West Bank were stabbed to death, while on 11 November a Palestinian man was reportedly shot to death by Israeli security forces during clashes at a refugee camp near Hebron.

Mr. Toyberg-Frandzen also said that the Secretary-General welcomes the renewed assurances by Israeli Prime Minister Benjamin Netanyahu that there will be no changes made to the status quo regarding the holy sites. Mr. Ban expects Israel to continue to ensure the protection of the holy sites and the safety of all worshippers, as per its agreement with Jordan.

Expressing hope that the announced confidence-building measures and firm commitments to maintain the status quo regarding the holy sites will “translate immediately into a de-escalation of tensions,” Mr. Toyberg-Frandzen said he was encouraged by the lifting on 14 November of age restrictions for access to the Haram Ash-Sharif/Temple Mount, where Friday prayers reportedly occurred without incident.

Another worrying development, however, is the increase in demolitions of Palestinian buildings, which is also contributing to rising animosity in Jerusalem, he noted. Since 21 October, a total of 82 structures – of which 47 are residential – were demolished in the West Bank, including East Jerusalem. The demolitions displaced 169 Palestinians, including 80 children.

Meanwhile, Israel’s ongoing settlement activity “continues to undermine efforts to calm the tensions in Jerusalem,” Mr. Toyberg-Frandzen said. Noting that plans have been advanced to build some 500 residential units in the settlement of Ramat Shlomo, and 28 new building permits and 200 new residential units were approved in the settlement of Ramot, in East Jerusalem, he stressed that such actions are in defiance of the unanimous opposition to increased settlement activity expressed in the recent Council session on Jerusalem.

“As the Secretary-General has consistently repeated, such unilateral actions will only further impede the chances for long-term stability and a durable peace and should therefore be reversed,” Mr. Toyberg-Frandzen said.

Reiterating that the Secretary-General urges the parties to return to peace talks, he noted the recent meeting on the peace process held in Washington and the call for the resumption of peace talks by the European Union’s High Representative during her visit to the region this month.

“Returning to negotiations has never been more important. The absence of a credible political framework is further hardening positions on both sides and is providing greater political space to those seeking to exploit the lack of trust between the two parties for personal or political gain,” he said.

Turning to Gaza, Mr. Toyberg-Frandzen said that while some signs of progress have gradually started to emerge, the overall state of affairs in the region remains “volatile and fraught with potential pitfalls.”

On a positive note, he noted that the temporary Gaza reconstruction mechanism began its operations earlier this month. Led by the Palestinian Government of National Consensus and working through the private sector, the mechanism’s priority is the provision of reconstruction material for urgent shelter repairs.

He also noted that by 13 November, 1,086 Gazans had been able to purchase much-needed construction material, including some 10,146 bags of cement to start the rehabilitation of their homes. In addition, there are currently $62 million worth of UN construction projects awaiting approval by the Israeli authorities for an average of 24 months. Timely approval of these projects would be an important step towards accelerating the recovery and reconstruction efforts in the Gaza Strip, he said.

“The United Nations is actively assisting in facilitating the implementation of the mechanism,” Mr. Toyberg-Frandzen said. “But in order for it to be successful we need a conducive environment and the cooperation of all the parties concerned,” he stressed, noting that it is “critically important” that donors honour the pledges made at the Cairo Conference on 12 October.

Furthermore, he said it is encouraging that Israel reportedly plans to increase the number of truckloads of construction materials entering the Gaza Strip, up to 800 trucks daily, instead of the current 350 trucks. Calling on the Palestinian factions to uphold their responsibilities to ensure that the reconstruction material is not diverted to support illegal activities, he also encouraged both Israel and Egypt to accelerate efforts to come up with sustainable solutions that will address their legitimate security concerns while progressively easing border restrictions.

However, Mr. Toyberg-Frandzen stressed that the reconstruction of Gaza is “doomed to fail” without a long-term ceasefire between Israel and the Palestinians. In that regard, he noted Egypt’s intention to host talks during the second half of November after their postponement last month.

“The importance of urgently continuing the negotiations cannot be overstated,” Mr. Toyberg-Frandzen said. “We strongly encourage the parties to use the opportunity of the talks to reach agreement on concrete arrangements that will sustain the ceasefire and reinforce reconstruction efforts.”

Specifically, he said the talks should involve discussion of tangible steps leading to the lifting of the closures that continue to “perpetuate Gaza’s socio-economic despair and embolden the proponents of extremism and violence,” he stressed.

Mr. Toyberg-Frandzen also said that there has been little or no progress on implementing the agreement that established the Palestinian Government of National Consensus. Encouraging the Palestinian factions to urgently undertake the necessary work to implement the agreement and refrain from any action that could undermine such efforts, he stressed that the Government of National Consensus must be empowered to assume its “rightful security and governance responsibilities” in Gaza.

“The success of Gaza’s reconstruction also relies on Palestinian willingness to truly unite and do what is necessary to facilitate the entry of the Government of National Consensus into Gaza. Addressing these challenges will not be easy but there is no alternative,” he added. 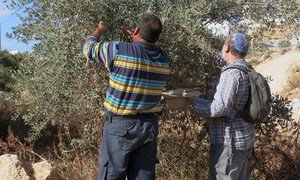 Amid an outburst of violence between Israelis and Palestinians, United Nations Secretary-General Ban Ki-moon today urged all parties to do everything they can to reduce the simmering hostilities and continue, through dialogue, on the path to peace.