UN launches ‘pocketbook’ on nutrition ahead of major conference in Rome

The United Nations Food and Agriculture Organization (FAO) has today published a comprehensive pocketbook of nutrition-related data covering all regions of the world ahead of the Second International Conference on Nutrition (ICN2) taking place in Rome this week.

Food and Nutrition in Numbers– a pocket-seized compendium dedicated to the state of nutrition worldwide – offers data highlighting trends on micronutrient deficiencies, obesity and non-communicable diseases from 1990 to the present.

“The pocketbook is a useful reference for policy makers, as it provides an overview of various aspects of nutrition at country, regional and global levels,” Josef Schmidhuber, Deputy Director of FAO’s Statistics Divisionsaidin a statement.

The pocketbook also offers indicators on the links between nutrition, health and the environment. Readers, who can access the little book on their mobile devices through an app, can find data on food prices, food consumption, agriculture-related carbon emissions and land use, among others.

Small, pocket-sized print versions will be distributed to delegations attending ICN2 so that they may compare country data during the conference and inform policy-makers at home.

“A country that does not pay attention to the nutrition of its citizens will pay dearly in health costs and loss of productivity and this can significantly reduce its economic development,” Anna Lartey, Director of FAO’s Nutrition Division warned today ahead of the Conference.

The pocketbook data shows that while progress has been made in reducing the percentage of hungry people globally, some two billion people are still micronutrient deficient –meaning they lack the vitamins and minerals needed to lead healthy and production lives.

But there has been an increase in food waste and obesity globally, which means the world produces far more food than it needs, leaving deep resource footprints, in terms of land and water use, carbon emissions, environmental degradation and other aspects of food production.

“We live in a world of plenty and it’s remarkable how much more food agriculture has produced over the past decades,” added Schmidhuber.

“But what is equally remarkable is that in this world of plenty, we still have 800 million who don’t consume enough calories and 2 billion who don’t eat well – this is why this conference is so important,” he added.

What needs to be done

Working together for better nutrition

More than 100 ministers and representatives from civil society will gather 19-21, November at FAO Headquarters in Rome for ICN2, where they will adopt the Rome Declaration on Nutrition and a 60-point Framework of Action meant to guide national policy commitments.

In addition, UN Radio, which is on the scene in Rome as preparations for the Conference get under way, reports that civil society groups working on food and nutrition related issues have kicked off a two – day meeting to consider what is at stake in their respective countries and regions.

They are also expected to study outcome documents to be endorsed at the conference, which will reportedly bind countries to take ten steps to translate their commitments for nutrition into action. Their discussions are expected to feed into the work of the Conference.

Co-organized with the UN World Health Organization (WHO), ICN2 will bring together relevant ministries, agencies, and organizations to identify priorities for enhanced international cooperation on nutrition.

According to FAO, the global economy, food systems and the nutritional status of populations have changed significantly since the first global conference on nutrition in 1992.

The agency says a new policy framework and more appropriate responses are needed, with now more than half the world’s population affected by malnutrition. 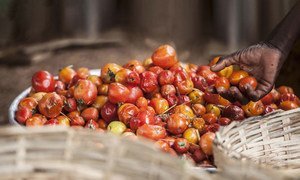 The United Nations Food and Agriculture Organization (FAO) today kicked-off a two-day meeting focusing on civil society's role in giving a voice to the hungry and how best to improve a multi-stakeholder approach to food security and nutrition policy development at national, regional and global levels.