OSCE/Thomas Rymer
A voter casting her ballot at a polling station in Kyiv during Ukraine's early parliamentary elections on 26 October 2014.
12 November 2014

Prevailing hostilities in Ukraine in recent days are putting the ceasefire agreed to in September under “continuous and serious strain,” a senior United Nations political official told the Security Council today, warning against the possibility of a return to full-scale fighting despite prospects of hope offered by recent parliamentary elections.

“The promise of renewal, and of renewed, energy towards solving Ukraine’s problems embodied in the recent parliamentary elections, threatens to be overshadowed by the worsening security situation in the east of the country,” said Jens Anders Toyberg-Frandzen, Assistant Secretary-General ad interim for UN Political Affairs, in his briefing to the Council.

“Nonetheless, the prospect that a new, reform-oriented ruling coalition will be formed, empowering it to move the country closer to a path of peace and stability, provides the avenue for all to support Ukraine out of this debilitating conflict,” he added.

Focusing his comments on political developments in Ukraine and the latest developments related to the conflict in the east of the country, Mr. Toyberg-Frandzen said that the early parliamentary elections held on 26 October were conducted in a manner that observers for the Organization for Security and Cooperation in Europe (OSCE) welcomed as “largely upholding democratic commitments,” although there was no voting in Crimea or parts of Donbas under rebel control.

Noting that discussions are under way for the formation of Government, Mr. Toyberg-Frandzen expressed hope that the leading coalition will be bound to the “rapid implementation of the comprehensive political, legal and economic reforms to which the Ukrainian authorities have committed themselves.”

The ability of the leading coalition to “work constructively alongside the Opposition Bloc” will also be key for the unity and stability of Ukraine, he stressed, expressing hope that a comprehensive national dialogue to rebuild cohesion and address all outstanding critical national issues would begin soon.

Continuing, he said that as of 3 November, hostilities in the east reignited with the potential to further undermine the Minsk agreements. Currently, the security situation in Donetsk and Lugansk “almost rivals” the period immediately preceding the ceasefire agreement of 5 September, he stressed.

“With the Minsk agreements in question, and uncertainty over how much strain the ceasefire can withstand, we are deeply concerned over the possibility of a return to full-scale fighting,” he said.

Alternatively, the conflict may “simmer this way for months, with sporadic, low-level battles, marked by periods of increased hostilities and further casualties,” Mr. Toyberg-Frandzen said. While either scenario would be catastrophic for Ukraine, a third prospect is that of a “frozen” or protracted conflict, which would entrench the current status quo in south-eastern Ukraine for years or even decades to come, he said.

This past weekend, particularly on the night of 9 November, hostilities were reported to be at their worst in months, with a heavy exchange of artillery shelling in and around Donetsk. A similar level of fighting was reported today, Mr. Toyberg-Frandzen said. Lives continued to be lost daily, including of two schoolchildren as a result of shelling in Donetsk on 5 November.

This upsurge in fighting comes amid regular reports from the OSCE of an influx of large convoys of heavy weapons, tanks and troops flowing into rebel-held areas, he continued. In this connection, there is “no doubt that a failure to secure the Russian-Ukrainian border is a factor that continues to impede the path to peace,” he said.

Meanwhile, the humanitarian situation continues to deteriorate in parts of Donbas. With the onset of harsh winter conditions, the number of internally displaced persons is expected to increase. If there is a return to full-scale fighting, the numbers could grow exponentially, he warned.

Furthermore, he said that consultations of the Trilateral Contact Group with rebel representatives have not been scheduled, while the self-proclaimed leaders of the Donetsk and Lugansk “People’s Republics” have reportedly signalled that they would not participate in future consultations, appointing persons of less authority in their place.

Yet, he noted that while these agreements have been breached in various respects and are fragile, “no side has unilaterally abrogated them,” he said. In recent days, there have also been some small, albeit positive steps towards implementation, such as a meeting between the general staff of the Russian and Ukrainian military on a line of delimitation. Although no agreement was reached at that time, subsequent meetings are reported to take place soon.

Turning to UN activity in relation to Ukraine, Mr. Toyberg-Frandzen said that the Human Rights Monitoring Mission there has continued its work providing reporting on the human rights situation throughout the country, and on factors that could negatively affect the social, political and security situation and efforts towards the solution of a crisis. The Mission’s seventh monthly report will be published on 20 November. In the meantime, the mission is seeking an extension of its presence in the country beyond 15 December.

With nearly 1 million people now displaced by the conflict, both within Ukraine and to neighbouring countries, UN humanitarian agencies continue to scale up their presence to respond to the growing needs, he noted.

He also noted that Under-Secretary-General for Political Affairs Jeffrey Feltman is slated to travel back to Ukraine in the near future, pending the formation of the new Government.

“It is our collective responsibility to ensure that none of these scenarios take hold,” Mr. Toyberg-Frandzen concluded. “The only alternative is for the fighting to end so that all Ukrainians can rebuild their lives in a stable and secure country, with Ukraine’s sovereignty and territorial integrity preserved.” 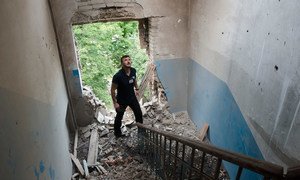 United Nations Secretary-General Ban Ki-moon today deplored the planned holding by armed rebel groups in eastern Ukraine of their own “elections” on 2 November, calling the potential polls a “breach of the constitution and national law.”