The United Nations Special Representative of the Secretary-General on Sexual Violence in Conflict expressed concern today about allegations circulating in Darfur local media over the mass rape of 200 women and girls in a town in region’s North, calling on the Government of Sudan to allow “immediate and unhindered” access for an investigation.

In a press statement today, Ms. Zainab Hawa Bangura said that the African Union-UN Hybrid Operation in Darfur, known by the acronym UNAMID, should be given access by the Government of Sudan to investigate and verify whether the incidents reported in the town of Tabit have occurred and, if they have, to ensure accountability.

Furthermore, she called on humanitarian actors to ensure “appropriate services” for any survivors.

“It is critical that in the process of verifying the facts that the safety of survivors is of paramount concern,” she declared.

Reiterating the support of the UN to Sudanese authorities to address any incidents of conflict-related sexual violence in a comprehensive manner, Ms. Bangura said her office stands ready to cooperate with UNAMID in line with the UN-backed African Union (AU) Framework of Cooperation on Prevention of Conflict-Related Sexual Violence in Africa.

That agreement, which was signed at the end of January, strengthens national policies, legislation and institutions working on conflict-related sexual violence.

Two days ago, UNAMID expressed deep concern about the allegations of mass rapes in Tabit, which is located 45 kilometres south-west of El Fasher, in North Darfur. UNAMID has declared that it is conducting a thorough investigation into the veracity of the claims. 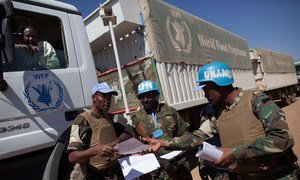 The African Union-United Nations hybrid mission in Darfur (UNAMID) has expressed its “deep concern” about allegations circulating in local media over the mass rape of 200 women and girls in a town in the region’s North, declaring that it is conducting a thorough investigation into the veracity of the claims.