A United Nations conference concluded in Vienna, Austria today with the adoption of a 10-year action plan aimed at accelerating sustainable development in the world’s 32 landlocked developing countries (LLDCs).

The Programme of Action adopted by the Second UN Conference on LLDCs contains six clearly defined priorities and encapsulates a unified stance by the international community on a broad array of crucial issues – from concrete steps toward the structural transformation of LLDC economies and infrastructure development, to improving international trade and bolstering regional integration and cooperation.

“We are strongly committed to the implementation of the [Programme of Action] to address, in a holistic manner, the special development needs and challenges of landlocked developing countries arising from their…remoteness and geographical constraints,” proclaimed the Declaration that culminated the three-day Conference, attended by more than 1,000 participants in the Austrian capital.

The 23-page outcome document was described by Gyan Chandra Acharya, Secretary-General of the Conference, as an important milestone in promoting the development agenda of LLDCs.

The document, for example, expresses an unambiguous commitment by all governments to ensure greater emphasis on reducing transit time, promoting infrastructure development and maintenance, ensuring trade facilitation measures in an accelerated manner, besides linking them with the promotion of economic diversification, structural transformation, connectivity to global value chains and regional integration.

This holistic approach together with a clear call to ensure coherence with the global processes is expected to enable the LLDCs to achieve sustained and sustainable economic growth and ensure their meaningful integration into the global economy.

“The Vienna conference has come out with a holistic, forward looking and action oriented program and I clearly see that in the document that has been adopted,” said Mr. Acharya in his closing remarks.

He added that the text was “holistic” in that it takes up transit, trade, and infrastructure issues together with the regional cooperation, structural transformation and coherence with the global processes in a pronounced manner as priorities.

Mr. Acharya further stressed that while recognizing the special challenges and vulnerabilities of LLDCs, Member States, through the outcome document, underscored that the landlocked countries have to transform themselves into land linked countries in order to reap full benefits from regional cooperation and globalization.

The outcome document is action-oriented, as governments clearly spelled out tangible actions to be taken by LLDCs, transit countries and development partners in each of the six priority areas identified together with clear national, regional and global level implementation, monitoring and review, explained Mr. Acharya, who is also the UN High Representative for the Least Developed Countries, Landlocked Developing Countries and Small Island Developing States.

Mr. Acharya highlighted that the outcome document stresses renewed and strengthened partnerships between the LLDCs, transit countries and development partners within the context of north-south as well as south-south and triangular cooperation. Yet he added that while the action-plan “recognizes that LLDCs have the primary responsibility for their own development” the group of countries requires support “to effectively mobilize adequate domestic and external resources for effective implementation of the Programme of Action.”

A recurring theme throughout the Conference has been that while the LLDCs have seen incremental economic gains over the past decade, this progress has not made a meaningful dent in the rate of poverty among this group of countries and that the progress remained fragile in many of the LLDCs.

Nine of the 15 countries at the bottom rung of the development ladder are landlocked and the vast majority continue to lag behind their maritime neighbours in socio-economic development. To remedy this, the Vienna outcome calls for support “in a more coherent manner”, which would “contribute to an enhanced rate of sustainable and inclusive growth, which can contribute to the eradication of poverty.”

The meeting saw a flurry of activity with four high-level interactive thematic round-tables and 18 side events organized by various stakeholders in the margins of the meeting on a wide-range of issues relevant to the LLDCs, transit transport development, trade capacity enhancement and further integration into the regional and global markets.

The events gathered Heads of State, Deputy Prime Ministers, Ministers, UN Secretary General Ban Ki-moon, Sam Kutesa, President of the General Assembly, and Heads and senior representatives from international organizations who shared their views and experiences on how to enhance LLDCs' economic diversification and competitiveness through strengthened investments and policy measures in the areas of transport, infrastructure development and trade facilitation, sustainable energy and sustainable transport, through partnerships on vocational training, through increased regionalization of aid for trade, and particularly for landlocked least developed countries, through effective implementation of the Enhanced Integrated Framework.

“We have come a long way but the real work begins now,” Mr. Acharya said. “We must now move ahead to deliver with determination the [Programme of Action] that we have agreed here with understanding, solidarity and support of all. The international community has to deliver on these commitments to the 440 million people living in the landlocked developing countries.” 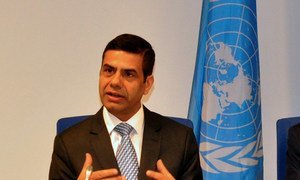 Private sector engagement is key to accelerating development in the world’s 32 landlocked developing countries (LLDCs), said delegates attending an event in the margins of the Second United Nations Conference on LLDCs, currently underway in Vienna, Austria.