As part of a visit to mark the thirty-fifth anniversary of the Vienna International Centre today, Secretary-General Ban Ki-moon was among those treated to a performance by Eurovision winner Conchita Wurst, calling her win earlier this year an “electrifying moment of human rights education.”

“She confounds people’s preconceived ideas of gender and sexuality – and she appeals to them to accept her as she is,” Mr. Ban said of the drag performer, who won the Eurovision Song Contest for Austria in May, marking the country’s first win since 1966.

“That is a powerful message,” he noted, adding that he is “delighted she is using her talent and the Eurovision platform to take this message to a global audience.”

“She is an incredible singer and entertainer,” Mr. Ban said. “But what made her win so meaningful was the way she turned her victory in the Song Contest into an electrifying moment of human rights education.”

Conchita is a bearded drag persona created by the Austrian singer and Thomas Neuwirth.

Mr. Ban praised Conchita’s promotion of respect for diversity,” which he said was a “core value” of the United Nations Charter.

“Discrimination has no place in the United Nations, nor in the world of the 21st century,” he said.

“As United Nations Secretary-General, I am proud to champion the cause of equality for all members of our human family no matter who they are or whom they love,” he stressed.

At the event, the Secretary-General also welcomed Hilda-Olivia Sarkissian, the first staff member in Vienna to receive full marital recognition for her family under the new policy, following the extension of benefits to same-sex partners of UN staff members earlier this year.

“I will continue to fight against transphobia and homophobia,” Mr. Ban declared. “I will stand strong for equality. I hope all of you join our global Free & Equal campaign,” he added, referring to a campaign launched in July by the UN High Commissioner for Human Rights that promotes greater respect for the rights of lesbian, gay, bisexual and transgender (LGBT) persons worldwide.

The Vienna International Centre was inaugurated in 1979, initially as a permanent residence for the International Atomic Energy Agency (IAEA) and the United Nations Industrial Development Organization (UNIDO). Today, the Centre comprises about 4,500 offices and 9 conference rooms, and accommodates some 3,600 international civil servants from about 100 countries. 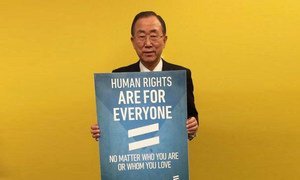 'Speak up, speak out' against homophobia, UN urges on International Day

Leading the United Nations family's push to help build a world rooted in tolerance where lesbian, gay, bisexual, and transgender (LGBT) persons live free from discrimination, Secretary-General Ban Ki-moon marked the International Day against Homophobia and Transphobia with a strong plea for action: “Equality begins with you.”