While the world’s 48 most vulnerable nations continue to make in-roads into poverty reduction, a far greater effort is needed if these countries are to eradicate extreme poverty by 2020, according to a new report launched at the United Nations today.

The study conducted by the UN Office for Least Developed Countries, Landlocked Developing Countries, and Small Island Developing States (UN-OHRLLS) noted that since the adoption of the 2011 Istanbul Programme of Action on their on their sustainable development, least developed countries (LDCs) have seen incremental economic and social gains.

This is mainly because of an increase in public spending and stronger investment and activity in mining, construction, manufacturing and service sectors.

The report however cautions that despite the uptick, the LDCs continue to be among the most vulnerable to external shocks, such as economic crises, climate-related events, natural disasters and health-related threats.

The recent outbreak of Ebola, which is concentrated in 3 least developed countries (Guinea, Liberia and Sierra Leone), highlights the importance of comprehensively addressing structural vulnerability, requiring joint efforts by such vulnerable countries and their development partners.

It also underscores that deepening inequality threatens to exacerbate existing poverty with implications for political and social stability in these countries.

The authors encourage leadership at the national level to implement policies that improve service delivery, address gender inequality and enable the poor to acquire investment assets that can improve their future income. Women and girls are especially in need of better access to economic opportunities through vocational and managerial skills training.

At a Headquarters press briefing today launching the report, Gyan Chandra Acharya, High Representative and head of UN-OHRLLS said the survey noted that since the 2011 Istanbul conference, progress of LDC’s on many of the goals and targets has been “mixed.”

Given extreme vulnerability and high-levels of poverty within these countries, the UN was recommending that their needs remain of particular concern, he said, adding: “There is still a long way for these countries to go, even to catch up with other developing countries, not to mention [developed nations].”

Among its other highlights, the report argues, greater access to land, technology and finance are integral to boost growth in the LDCs and reduce inequality. “The effectiveness of all policies, in their formulation and implementation, critically depends on sound national institutions,” the report notes.

The study further recommends that governments ensure that efforts to increase domestic revenue are designed in ways that curb inequality. In order to increase public resource mobilization, fiscal policies need to promote public investment that is sustainable, it says.

It adds that the UN Secretary-General’s proposal for a technology bank and an international investment support centre for the LDCs could play an important role in upgrading productive capacity, and leveraging the growth and poverty eradication effects of technology transfer and foreign direct investment inflows.

The reports concludes by calling for greater attention to be paid to eradicating extreme poverty in the LDCs within the on-going post-2015 development agenda, especially since most of these countries will miss most of the Millennium Development Goals (MDGs). 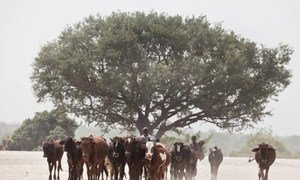 The growing menace of desertification poses a distinct threat to the world’s agriculture and eco-systems, the United Nations agriculture agency warned today, as it announced a new initiative aimed at curbing the spread of land degradation and building resilience to climate change.