The increasing use of armed drones within domestic law enforcement risks depersonalizing the use of force and infringing upon the rights of individual citizens, a United Nations independent human rights expert warned today.

In presenting his report on the use of armed drones within law enforcement to the General Assembly body that deals with social, humanitarian and cultural issues (Third Committee), Christof Heyns, the UN Special Rapporteur on extrajudicial, summary or arbitrary executions, stressed that such mechanized systems, controlled by a human from a distance, “can hardly do what police officers are supposed to do” such as using the minimum force required by the circumstances and assisting those who need help.

“The situation becomes even more problematic when the police use increasingly autonomous weapons – that is, weapons that have on board computers which decide on the use of force,” Mr. Heyns continued. “The decreased personal involvement of police officers in the deployment of force raises the question, among others, of who is responsible if things go wrong.”

In his report, the Special Rapporteur reminded Member States that the protection of rights such as the right to life and personal security and of human dignity outweigh the advantages gains from outsourcing police work to machines.

In addition, he noted the requirement under human rights law calling for authorities to use the minimum amount of force required by the circumstances of each case, citing an increasing number of examples in which individuals were killed or seriously injured as a result of improper use of weapons considered to be less lethal.

“The relationship between the State and those under its protection is very different from its relationship with those it regards as its enemies during armed conflict,” Mr. Heyns said.

Turning to the issue of the death penalty, also addressed in his report, the Special Rapporteur voiced concern about the resumption and extension of capital punishment in some countries which, he suggested, might constitute violations of the right to life.

Although he welcomed the general trend of States moving toward the abolition of the death penalty, he warned that some were still lagging behind.

“If executions were suspended for an extended period, it is unclear how authorities can provide objective reasons for resumption at a specific point in time, or for specific prisoners,” he said.

“If the timing of execution and selection of prisoners for execution are decided upon at random, or are dictated by factors such as deterioration in the law and order situation, then those executions are arbitrary.”

Recently, Equatorial Guinea, Pakistan, and the states of Washington, Maryland and Connecticut in the United States, decided to establish a moratorium or suspend executions while last April, El Salvador, Gabon and Poland acceded to the Second Optional Protocol to the International Covenant on Civil and Political Rights – an international agreement aimed at abolition. These countries join the more than 160 other Members States who have already either eliminated capital punishment or do not practice it.

At the same time, some States have resumed executing after decades while others reintroduced the death penalty for certain offences causing concern among UN rights officials.

Mr. Heyns urged the General Assembly to take action in its upcoming resolution on the death penalty, expected for December, noting that it provided an important opportunity for States to move away from “this form of punishment which does not belong in the modern era.” 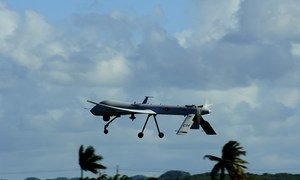 UN rights experts call for transparency in the use of armed drones, citing risks of illegal use

Expressing concern about the potential for illegal use of armed unmanned aerial vehicles, or drones, two United Nations human rights experts today called on States to be transparent in their use, to investigate allegations of unlawful killings and to respect the full range of applicable international law.