WHO/M. Missioneiro (file)
WHO welcomed the donation by the Public Health Agency of Canada of 800 vials of one of the leading candidate Ebola vaccines, rVSV-ZEBOV.
22 October 2014

A United Nations health committee has met for the third time in three months to evaluate the Organization’s ongoing response to the global Ebola crisis amid broader agency-wide efforts in confronting the deadly disease, UN officials confirmed today.

At a press briefing held at UN Headquarters in New York, UN spokesperson Farhan Haq said the World Health Organization’s (WHO) International Health Regulations Emergency Committee on Ebola had begun consultations in Geneva as part of its mandate.

The Emergency Committee is convened periodically to advise the WHO Director General on the risks associated with disease outbreaks and deliver recommendations on travel and trade restrictions. The group first met in August after which WHO declared Ebola a public health emergency of international concern and recommended the implementation of exit screenings for travellers who were sick or were in contact with those infected.

The spokesperson added that the Emergency Committee would share its conclusions with the public on 23 October.

According to WHO’s latest situation report on the Ebola response, a total of 9,936 confirmed, probable and suspected cases of Ebola have now been documented across five countries, including Guinea, Liberia, Sierra Leone, Spain and the United States, and two previously affected countries, Nigeria and Senegal, up to the end of 19 October. A total of 4,877 deaths have been reported during the same period.

Although the outbreaks have been declared over in Nigeria and Senegal, the UN health agency warned that Ebola transmission remained “persistent and widespread” in Guinea, Liberia and Sierra Leone.

The outbreak has impacted not only the health sector but various other areas. The UN Food and Agriculture Organization (FAO), for instance, noted that the current Ebola outbreak is the world’s largest recorded to date, adding that the crisis is “adversely impacting the food security of affected populations.”

“If not addressed now, the consequences of the outbreak could lead to long-lasting impacts on farmers’ livelihoods and rural economies,” FAO warned in a brief. “A multisectoral approach is required to contain the outbreak and stabilize affected areas.”

FAO is “urgently calling” for $30 million to support activities linked to its Regional Response Programme to the Ebola Virus Disease Outbreak over the next 12 months in Guinea, Liberia, Sierra Leone and at-risk countries, and is following “a twin-track approach to help halt the tragic loss of life while at the same time protecting incomes, nutrition levels and food security.”

Against that backdrop, the head of the UN Mission for Ebola Emergency Response (UNMEER), Anthony Banbury, visited the Guinean capital of Conakry, where he met with President Alpha Condé. Mr. Banbury arrived in the capital to present an operational framework for the Ebola response and “ensure a shared understanding of the key challenges and priority needs for Guinea,” the UN mission explained. 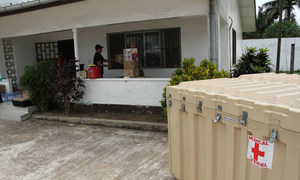 Amid positive developments in the global fight against Ebola, including a growing response to the Secretary-General’s appeals for the more funding to tackle the outbreak, the United Nations health agency today announced the expected delivery of Ebola candidate vaccines, as the UN system continues to ramps up efforts to quell the spread of the deadly virus.