The incidences of torture and ill-treatment around the world have not been diminishing and the need for effective prevention is “as great as it ever has been,” a United Nations human rights expert said today as he urged Member States to do more to tackle domestic corruption in order to prevent such episodes of abuses.

“There is a clear connection between torture, ill-treatment and corrupt practices,” the chairperson of the UN Subcommittee on the Prevention of Torture (SPT), Malcolm Evans said as he presented the SPT’s annual report to the General Assembly’s main body dealing with social, humanitarian and cultural issues (Third Committee) in New York.

“Effective torture prevention must tackle corrupt practices too,” he added.

The Subcommittee was established in 2002 and has a mandate to visit all places where persons may be deprived of their liberty, including police stations, prisons (military and civilian), detention centres, and mental health and social care institutions while ensuring that States are in compliance with their obligations as delineated under the Optional Protocol to the Convention against Torture.

In its report, however, the Subcommittee notes that its preventive work appeared to be getting more challenging, particularly in those States with higher levels of corruption where torture and ill-treatment were less likely to be discovered.

“States have very clear Convention commitments, yet we have experienced increasing delays in being provided with the information and facilities which are necessary to undertake visits efficiently and, for the first, time, we found it necessary to suspend one of our full visits, to Azerbaijan, due to repeated problems in securing immediate and unimpeded access to places of detention,” Mr. Evans continued.

Although he welcomed the increase in the number if States to have ratified the Optional Protocol – now at 74 – Mr. Evans also highlighted the burdensome lack of resources in the UN Human Rights Office which constrained the Subcommittee to only three full visits during 2013 and three others this year.

“Frankly, this number of visits is far too few too enable the SPT to properly fulfil its mandate,” he said. “At this pace, States will receive a full regular visit only once in 25 years.”

According to the Chairperson, the Optional Protocol is not “just a source of abstract legal obligations” but establishes a set of practical tools, in the form of independent national preventive mechanisms which work in tandem with the SPT and with the States Parties to take effective measures aimed at making torture and ill-treatment less likely, if not inexistent.

Despite Mr. Evans’ cautious outlook, he did welcome the newly launched Convention against Torture Initiative (CTI) spearheaded by Chile, Denmark, Ghana, Indonesia and Morocco and voiced hope that it would prompt other countries to ratify the Optional Protocol as well.

The CTI, in fact, has as its stated goal the ambition to identify challenges to State ratification of the Optional Protocol and delineate a way past these obstacles.

The Third Committee also heard from Claudio Grossman, the Chairperson of the UN Committee against Torture, who stressed that the issue of State intimidation and reprisals against citizens reporting torture and ill-treatment was a matter of serious concern.

“The ability of individuals to complain against their own States for violations by the States themselves embodies and important and crucial step toward realizing human dignity,” Mr. Grossman said.

“We all need, now, to commit ourselves to the full implementation of all the obligations set out in the Convention.” 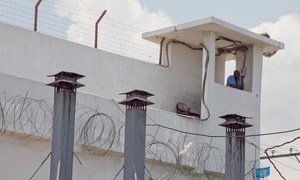 The Government of Malta has made strides towards preventing the torture and ill-treatment of people in detention, a group of independent United Nations rights experts confirmed today, but added that more needed to be done for the island nation to comply with its international obligations.