‘Clock is ticking’ for Gaza; pledges for aid, reconstruction must be honoured – Ban

UN Photo/Rick Bajornas
Secretary-General Ban Ki-moon (left) addresses the Security Council meeting on the situation in the Middle East, including the Palestinian question. Security Council President for the month of October, María Cristina Perceval of Argentina, is at right.
21 October 2014

On the heels of last week’s visit to Gaza, United Nations Secretary-General Ban Ki-moon told the Security Council today that promises made at a recent donor conference on rebuilding the war-ravaged enclave must “quickly materialize” into concrete assistance on the ground, especially as winter approaches.

“Nothing could have prepared me for what I witnessed in Gaza. I saw mile after mile of wholesale destruction,” Mr. Ban recalled as he briefed the 15-member body on his first visit to Gaza since this past summer’s conflict.

The Strip, along with Jerusalem, Ramallah and southern Israel, was one of the stops on his recent trip through North Africa and the Middle East, which also included visits to Tunisia, Libya, and Egypt, where in Cairo he attended an international donor’s conference on reconstruction in Gaza.

Today he commended donors’ efforts, which he said “surpassed expectations,” with pledges from some 50 countries amounting to $5.4 billion.

As it stands now, more than 100,000 residents of Gaza remain homeless with over 50,000 still sheltering in UN run school buildings. Many still lack access to the municipal water network. Blackouts of up to 18 hours per day are common.

While in Gaza, the Secretary-General visited a UN-supervised school in the Jabalia refugee camp, which was shelled during the hostilities.

“I met a young man whose brothers and sisters perished in the blasts. He is now confined to a wheelchair having lost his legs,” he recalled.

He also called for a thorough investigation into incidents where UN facilities sustained hits and many innocent people were killed. An independent Board of Inquiry has been set up to look into the most serious of cases, as well as instances in which weaponry was found on UN premises.

“Israelis also suffered during the conflict. I travelled to a kibbutz where I met the grieving family of a four-year-old child named Daniel who was killed by a Hamas rocket – another innocent victim of this mindless conflict,” said Mr. Ban.

He reiterated that firing rockets is unacceptable, because they have brought nothing but suffering. During his visit, the UN chief said he also visited a tunnel built by militants to launch attacks.

“I fully understand the security threat to Israel from rockets above and tunnels below. At the same time, the scale of the destruction in Gaza has left deep questions about proportionality.”

Despite the harsh reality on the ground, the Secretary-General said he left Gaza with a measure of hope. During his time there, the first supplies of urgently needed construction materials entered Gaza under a mechanism brokered by his Special Coordinator. He also welcomed the offer by Turkey of a ship to serve as a temporary power plant.

Palestinians too are forging ahead through an intra-Palestinian reconciliation agreement followed by a historic meeting in Gaza of the Cabinet of the Government of National Consensus, said the Secretary-General. This government must be united so that it can effectively manage Gaza’s borders and resume trade between Gaza and the West Bank.

The Secretary-General also reiterated his deep concerns about plans to construct residential housing units in occupied East Jerusalem, adding that “international law is clear: settlement activity is illegal” and urging the Israeli Government to reverse these activities.

Mr. Ban said he also met with Israel’s Prime Minister Benjamin Netanyahu, who personally assurance him of his Government’s commitment to refrain from changing policies with respect to the Holy Sites.

But the Secretary-General remains concerned about the mounting numbers of attacks by settlers and others as well as Israeli plans to “relocate” some 7,000 Palestinian Bedouins, the majority of whom are refugees, from their current locations in the central West Bank.

Just like at the donor conference in Egypt, Mr. Ban urged that the cycle of build and destroy must end. The international community “cannot be expected to pick up the pieces of another war and then pick up the bill.”

The planned resumption of indirect ceasefire talks between Israel and the Palestinians, under Egyptian auspices in Cairo was a welcomed step, the UN chief said, commending steps by Israel to ease restrictions on movement and trade in the West Bank and Gaza.

But there will not be hope for long-term stability in Gaza without addressing the underlying causes of the conflict: an end to the occupation that has grinded on for nearly half a century, a full lifting of the blockade on the Gaza Strip and effectively addressing Israel’s legitimate security concerns.

On Syria, the Secretary-General reiterated his call on all parties to protect civilians in the town of Kobane. In addition to the “barbarity” of Islamic State of Iraq and the Levant (ISIL), or Daesh, the Syrian Government continues to indiscriminately attack populated areas, including with barrel bombs.

The long-term strategic objective in Syria remains a political solution based on the Geneva Communiqué, he told the Security Council, emphasizing that a purely military response to the vicious new threat posed by Daesh could ultimately contribute to the radicalization of other Sunni armed groups and spark a cycle of renewed violence.

On Lebanon, the Secretary-General said he was troubled by a dangerous escalation since the August attacks by Daesh and Nusra Front on Arsal, the latest fighting earlier this month between the Nusra Front and Hizbollah outside the town of Brital.

He welcomed efforts by Prime Minister Salam and Lebanese leaders to uphold national unity and called on Lebanese parties to demonstrate flexibility to open the way for the election of a President. 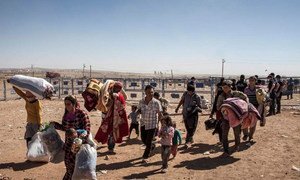