A week after a major conference in Cairo on the reconstruction of war-ravaged Gaza, and in the wake of recent visits to Gaza by the Palestinian Prime Minister, Rami Hamdallah and United Nations Secretary General, Ban Ki-moon, the key UN agency on the ground there has begun scaling up its response to meet critical needs of people in the Strip.

In a press release, the UN Relief and Works Agency for Palestine Refugees in the Near East (UNRWA) announced today that it is now focusing on providing food, water and sanitation services to over 40,000 displaced people in 18 of its installations, psycho-social support particularly for children, cash grants to the homeless for rent, as well as urgent repairs to 118 UNRWA installations, so that we can bring our services to full capacity.

“Our immediate aim is to help ensure that some of the most seriously affected families are able to improve their situation rapidly,” said UNRWA Spokesperson Chris Gunness, who added that the critical priority remains urgently needed reconstruction for large numbers of people.

As assessments continue, the agency has revised upwards figures of homes destroyed and people affected. “We now estimate that over 100,000 homes were damaged or destroyed, affecting more than 600,000 people. These are the latest figures and are likely to rise as UNRWA social workers and engineers continue their homes visits and inspections.”

One week ago today, at an international conference in Egypt, donors pledged some $5.4 billion in aid for Gaza reconstruction. Two day's later Secretary General Ban Ki-moon visited the war-ravaged enclave, where he viewed destruction wrought by the most recent conflict that was “beyond description”, and also met with the ministers of the National Consensus Government calling on them to focus all efforts on “building one Palestine.”

Today, UNRWA Commissioner General Pierre Krahenbuhl said that the enormity of the task ahead is becoming clear and the agency's increased pace of recovery and emergency work reflects this.

“Cairo saw important commitments made, which we welcome. On the ground we are confronted with high expectations by thousands of families in critical need. We therefore urge that pledges be rapidly transformed into actual contributions that will allow us to start the process of rebuilding,” he declared.

Access for building materials is critical and UNRWA has consistently called for the lifting of the blockade and again stressed that this is an essential parameter to enable Gaza to emerge from years of suffering, joblessness and a lack of prospects.

In the immediate weeks ahead, access for material must be facilitated by the recently negotiated temporary mechanism. As the UN Secretary General indicated, if applied in good faith it could make an important difference in terms of enabling reconstruction to take place, the agency says, underscoring that the people of Gaza need attention and support in this critical phase, especially with the winter approaching.

“They also need a paradigm shift, with an end to aid dependency, an end to the restrictions on movement, trade and employment imposed by the blockade. Further, freedom to travel, to import and export, to attain self-sufficiency remains a critical imperative,” UNRWA says. 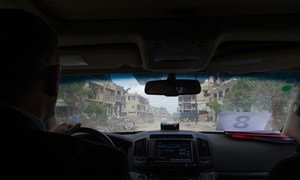 In war-ravaged Gaza, Ban urges ministers of new government to unite on “building one Palestine”

Two days after donors pledged $5.4 billion in aid for Gaza reconstruction, Secretary General Ban Ki-moon visited the war-ravaged enclave, where he viewed destruction wrought by the most recent conflict that was “beyond description”, and also met with the ministers of the National Consensus Government calling on them to focus all efforts on “building one Palestine.”