The Security Council has urged the world to step up measures to defeat the Islamic State in Iraq and the Levant (ISIL) after the terrorist group carried out a spate of brutal attacks in Baghdad and Anbar over the past few days, calling for “a common effort” among governments and institutions to “stamp out” the violence and intolerance ISIL espouses.

“ISIL must be defeated,” the members of the Council declared in a press statement issued late yesterday evening, which condemned the vicious string of suicide, vehicle-borne, and other attacks perpetrated by ISISL terrorist in Baghdad and surrounding provinces over the past several days, “which have killed scores of Iraqis, including an elected Member of Parliament from Basrah Province and the Police Chief of Anbar Province.”

Expressing “deep outrage” about all Iraqis as well as nationals of other States killed, kidnapped, raped, or tortured by ISIL, as well as its child recruitment, the Council called for the perpetrators to justice, and for the international community, “in accordance with international law, to further strengthen and expand support for the Government of Iraq, including Iraqi Security Forces, in the fight against ISIL and associated armed groups.”

“There has to be a common effort amongst governments and institutions, including those in the region most affected, to counter ISIL, Al-Nusra Front and all other individuals, groups, undertakings and entities associated with Al-Qaida,” in line with relevant UN resolutions, said the Council, emphasizing through its statement that “the intolerance, violence and hatred ISIL espouses must be stamped out,” 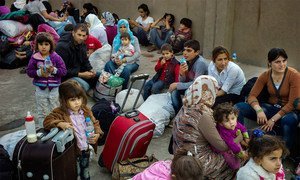 A new offensive launched by the Islamic State in Iraq and the Levant (ISIL) against the Iraqi city of Hit has triggered yet another wave of internal displacement in the war torn country, the UN refugee agency announced today, warning that those displaced were facing increased hardships amid advancing cold weather and overcrowded refugee camps.