At UN meeting, tolerance and education highlighted as critical allies against terrorism

“There is no more time to lose. We have to act concertedly and with determination,” Mr. Ban said in a message to an event held by the Counter-Terrorism Committee (CTC) that was delivered by Under-Secretary-General for Political Affairs Jeffrey Feltman.

“Our action has to be multifaceted: addressing the immediate security challenges, the political context and underlying, long-term grievances,” he said, adding special attention must be given to the role education can play in building tolerance within the global and local community.

“The education sector has an important role to play. Member States must strengthen their education systems to promote tolerance and mutual understanding among our children and youth, and to foster a global alliance of civilizations. Stronger civil society participation is equally necessary.”

Above all, the Secretary-General stressed that Member States should avoid responses to terrorism that are carried out in a way that “exacerbates the problem,” such as when efforts are not sufficiently targeted and entire communities feel victimised by human rights abuses committed in the name of counter-terrorism.

“Such abuses are not only immoral,” the UN chief said. “They are counterproductive.”

The CTC meeting, held at UN Headquarters in New York, was convened to provide Morocco with a platform to explain its unique approach to defusing extremism and countering incitement to terrorist acts – a methodology bound within the context of Islam and which the country has been sharing with national counterparts in West Africa.

In an interview with UN Radio earlier in the day, Ahmed Toufik, Morocco’s Minister of Habous and Islamic Affairs, explained that terrorism exploits the failures and fractures within a society.

The role of government, Mr. Toufik noted, was to identify the radicalizing elements within the social make-up and pacify them. In particular, he pointed to the special function played by Morocco’s King Mohammed VI as both political leader and “Commander of the Faithful,” that is, the country’s leading religious authority, which provided a noteworthy path towards making religion and politics walk “hand-in-hand without any place for violence or terrorism.”

In Morocco, he explained, the political bodies assisted the religious leaders by grounding all religious teachings within the ethics of moderation.

“Those fundamentals are against terrorism because if you are Sunni, you can’t kill people because only God may judge their acts,” said Mr. Toufik.

“Preventive measures are as important as the coercive ones,” Mr. Laborde said.

“The Moroccans teach their religious leaders moderation which constitutes, according to them, the authenticity of Islam,” Mr. Laborde pointed out. “It’s really important to show the world that this is a good practice. And we are ready to disseminate this good practice all over the world.” 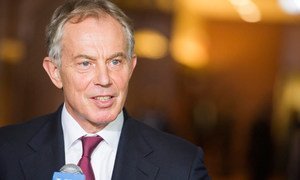