In order to promote economic recovery and prevent pensionable citizens from relapsing into poverty, social protections must be placed at the forefront of the future development agenda currently being elaborated by Member States, says the United Nations labour agency.

In its latest report, headlined Social Protection for older persons: Key policy trends and statistics, the International Labour Organization (ILO) has warned that 48 per cent of the world's pensionable population does not receive a retirement benefit while, for many of the 52 per cent who do, coverage tends to be inadequate.

“Many developing countries are boldly expanding their pensions systems. But as important as expanding coverage is guaranteeing adequate pension benefits,” said Isabel Ortiz, Director of the ILO's Social Protection Department, which produced the report.

“Older men and women have a right to retire in dignity, without falling into poverty. This is an issue worldwide.”

These include cuts in health and other social services, the reduction of benefits and increase in contribution rates and the raising of the retirement age.

“These adjustments are undermining the adequacy of pension and welfare systems and reducing their ability to prevent poverty in old age,” Ms. Ortiz noted.

“The long-term liabilities of austerity take time to show up. Depressed household income levels are leading to lower domestic consumption and slowing down economic recovery. It is alarming that future pensioners will receive lower pensions in at least 14 European countries by 2050,” she added.

At the same time, a number of countries have registered positive trends in their social protection systems. China, Lesotho, Thailand, Timor-Leste, and Tunisia, for instance, have experienced what the ILO described as “remarkable successes” in the reach of their coverage with gains ranging from 25 to more than 70 per cent of the population.

Pointing to China, in particular, Ms. Ortiz observed that the country had achieved nearly universal coverage of pensions and increased wages while other countries, such as Argentina, Bolivia, Chile, Hungary, Kazakhstan, and Poland, were reversing the earlier privatization of their pension systems as they were too expensive and had not expanded coverage.

“Public social security systems with strong social protection floors are essential for economic recovery, inclusive development and social justice, and therefore must be an integral part of the post-2015 development agenda,” concluded Ms. Ortiz, referring to the new development agenda that will succeed the landmark Millennium Development Goals (MDGs), set to expire in 2015. 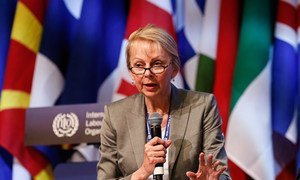 In the aftermath of the global economic crisis, more than 70 per cent of the world population is without proper social protections, the United Nations labour agency today reported, urging governments to scale up investment in child and family benefits, pensions and other public expenditures.