UN Photo/Mark Garten
Wide view of the Security Council at its summit held at the level of Heads of Government to address the threat posed by foreign terrorist fighters.

24 September 2014
Responding to an unprecedented flow of foreign terrorist fighters and the growth of facilitation networks fuelling conflicts around the world, the United Nations Security Council today adopted a resolution to resolutely address this growing threat to international peace and security.

During a high-level summit chaired by Barack Obama, President of the United States, which holds the Council’s rotating presidency this month, the 15-member body voted unanimously to adopt the text, which calls on Member States to cooperate in efforts to address the threat posed by foreign terrorist fighters.

The resolution decided that Member States shall “prevent and suppress the recruiting, organizing, transporting or equipping of individuals who travel to a State other than their State of residence or nationality for the purpose of the perpetration, planning or preparation of, or participation in, terrorist acts or the providing or receiving of terrorist training, and the financing of their travel and of their activities…”

It underscored “the particular and urgent need to implement this resolution with respect to those foreign terrorist fighters who are associated with ISIL [Islamic State of Iraq and the Levant], ANF [Al-Nusrah Front] and other cells, affiliates, splinter groups or derivatives of Al-Qaida…”

Among its other provisions, the text urged Member States to intensify and accelerate the exchange of operational information regarding actions or movements of terrorists or terrorist networks, including foreign terrorist fighters.

Opening the meeting, which was scheduled to hear from around 50 speakers, many of them represented at the level of head of State or government, Secretary-General Ban Ki-moon called those who carry out terrorist attacks “enemies of the faith.”

“As Muslim leaders around the world have said, groups like ISIL – or Da’ish – have nothing to do with Islam, and they certainly do not represent a state,” he stated. “They should more fittingly be called the ‘Un-Islamic Non-State.’”

He added that the growing phenomenon of foreign terrorist fighters is a consequence – not a cause – of the conflict in Syria.

“A long period of upheaval and, until recently, unresponsive leadership in Iraq – coupled with outrageous human rights abuses in Syria – have created a hothouse of horrors,” he said, as he highlighted the need for a “creative and comprehensive” political strategy in Syria and beyond to stem the flow of foreign terrorist fighters.

“Terrorists must be defeated, but we must do so in a way that avoids the deliberate acts of provocation that they set for us – victimization, further radicalization and more civilian deaths.”

While immediate security issues must be addressed, said the Secretary-General, the biggest threat to terrorists over the longer term is not the power of missiles, but the politics of inclusion.

“It’s peaceful societies and respect for human rights. It’s education, jobs and real opportunity. It’s leaders who listen to their people and uphold the rule of law. Missiles may kill terrorists. But good governance kills terrorism. Free and independent societies – free from suffering, oppression and occupation – this is what will kill terrorism.”

Speaking in his national capacity, Mr. Obama said that the tactic of terrorism is not new. “So many nations represented here today, including my own, have seen our citizens killed by terrorists who target innocents,” he said, while also noting the murder today of French citizen Hervé Gourdel by terrorists in Algeria.

“Resolutions alone will not be enough,” he added. “Promises on paper cannot keep us safe. Lofty rhetoric and good intentions will not stop a single terrorist attack.

“The words spoken here today must be matched and translated into action, into deeds – concrete action, within nations and between them, not just in the days ahead, but for years to come. For if there was ever a challenge in our interconnected world that cannot be met by any one nation alone, it is this: terrorists crossing borders and threatening to unleash unspeakable violence.

“These terrorists believe our countries will be unable to stop them. The safety of our citizens demands that we do.”

In a statement issued to the press, the Council strongly condemned the “heinous and cowardly murder” Mr. Gourdel, saying the killing once again demonstrates the barbaric brutality of those who declare themselves affiliated to ISIL.

Council members stressed that those responsible for the killing must be held accountable, and demanded the immediate, safe and unconditional release of all those who are kept hostage by ISIL, Al-Nusrah Front and all other individuals, groups, undertakings and entities associated with Al-Qaida. 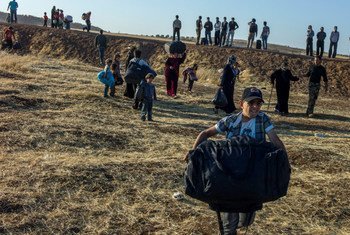