Taking the podium today at the United Nations General Assembly in New York, leaders from the Gulf and Middle East regions called for a collective strategy to contain and address extremists in Iraq, Syria and other parts of the world, while also calling for international efforts to reconstruct Gaza.

“It is imperative for the international community to work hard to put an end to the bloodshed and the systematic destruction of Syria by a regime that has put its people between a rock and a hard place to choose between accepting its presence at the helm or burning down their country,” Sheikh Tamim bin Hamad Al-Thani, Amir of Qatar, told the 69th annual high-level meeting.

The Qatari leader reiterated his call on the Security Council to “shoulder its legal and humanitarian responsibility and support the Syrian people” against terrorism and genocide.

Turning to the wider issue of terrorism in the region, the Emir underscored the importance of addressing the underlying roots of violence in a social environment.

In his address, King Abdullah II of Jordan stressed that a political solution must be found to the conflict in Syria which has spurred 1.4 million people to cross into Jordan’s borders, making his country the third largest host of refugees.

“The response has not kept pace with the real needs,” the King said, urging a concerted effort to get aid flowing into Syria and neighbouring host communities.

Both leaders also highlighted the plight of their Palestinian neighbours, advocating for the implementation of a two-state solution agreed to by the international community, and mobilization of funds to rebuild Gaza.

“We cannot address the future of my region,” King Abdullah II said, “without addressing its central conflict: the denial of Palestinian rights and statehood.”

Among other topics, he also spoke about the need to oppose threats to Jerusalem’s Arab Muslim and Christian identity stressing that “Arab Christians are an integral part of my region’s past, present, and future.”

This year’s theme for the annual debate is “Delivering on and implementing a transformative post-2015 development agenda.” Made up of all the 193 Member States of the United Nations, the General Assembly provides a forum for multilateral discussion of international issues covered by the UN Charter.

At UN Assembly, Iran calls for united front against ‘false’ Muslims killing in name of Islam 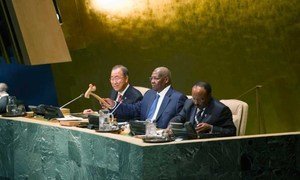