There is more to UN Security than the dashing blue uniforms seen patrolling the gates of the diplomatic centre of the world: UN Headquarters in New York.

In the early years, the UN flag symbolized neutrality – protecting its staff and heralding the Organization as a benevolent actor in world events. Decades later, the landscape began to change. As UN personnel in the field were increasingly targeted by malicious attacks and the security environment became more threatening, the security system that had been in place since the Organization’s inception needed a facelift.

To meet the challenges, a new UN Security Coordinator became the sovereign of all-things security – from policy and procedures to a coherent UN response to emergency situations. At the heart of this realm was the security and safety of some 100,000 UN staff worldwide.

Long-time UN Operations Inspector Matthew Sullivan of the Department of Safety and Security shared his first-hand experience on the perils of field work. He sets the time frame as the war in the former Yugoslavia – on a plane full of high-level UN officials flying in to negotiate a peace agreement.

Mr. Sullivan recalls, “It was during a terrible time of the war. The Sarajevo airport was closed but allowed one UN flight in that day. We were about to land and there was an explosion. They shot a hole in the back of the plane. They kept firing at us. We had a good team and reacted well. We got the plane on the ground and finally into the safe area of the airport where the military was located. We all survived and the plane survived, so it was quite an experience.” 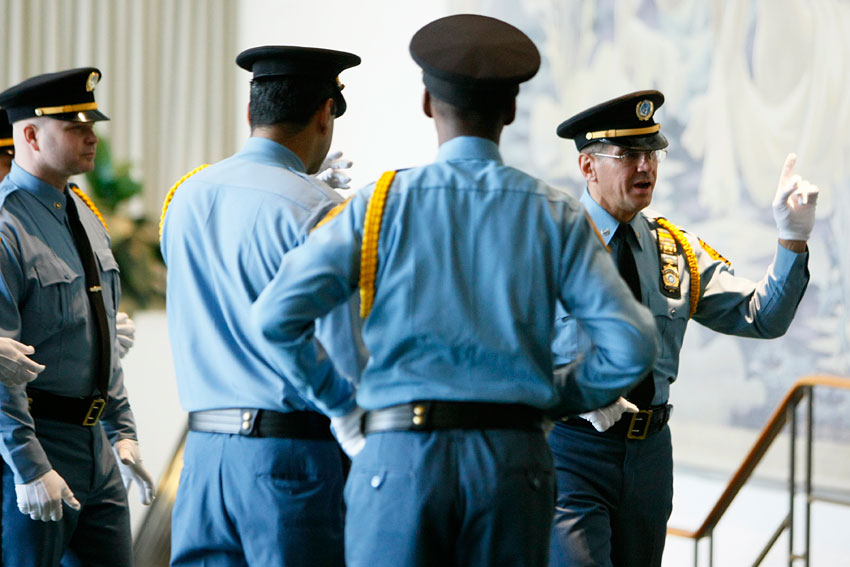 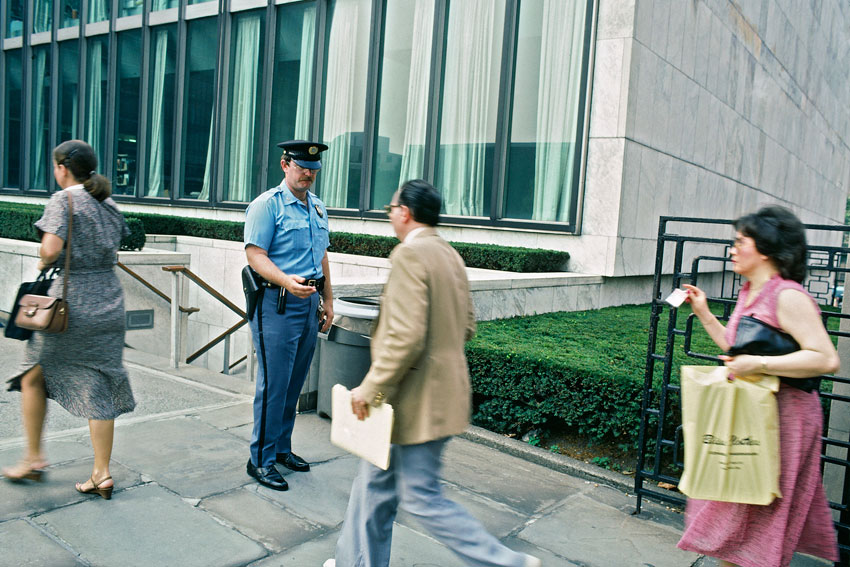 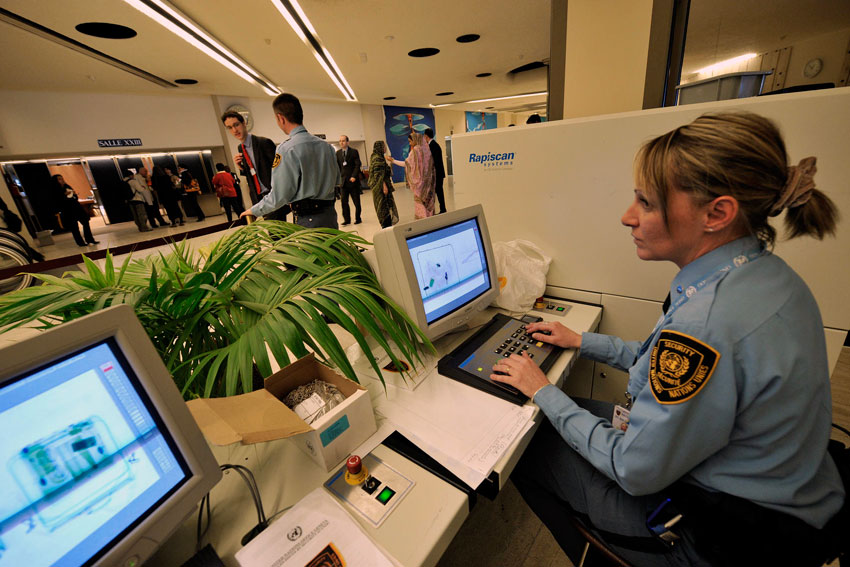 UN Security Officer at the entrance of the High-Level Segment of the 7th session of Human Rights Council, Geneva. (May 2008). UN Photo/Jean-Marc Ferré 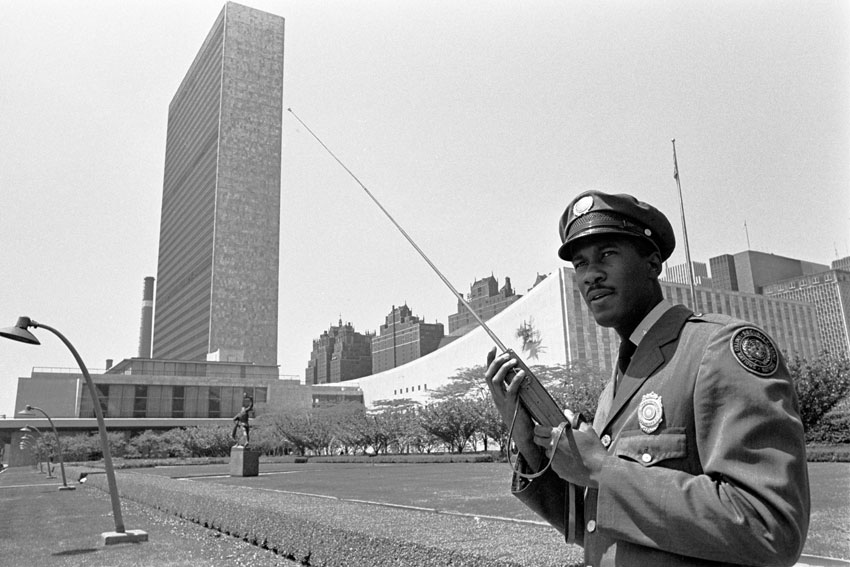 A Security Officer remains in constant touch with his command post in the UN Secretariat building via walking-talkie radio, during his regular inspection tour of the UN Gardens (June 1969). UN Photo/Yutaka Nagata

Notwithstanding the dangers, after 30 years in UN blue, and with a treasure trove of thrilling stories, the Inspector remains devoted to his work. “I love the job, it’s very rewarding,” Mr. Sullivan said. “I believe in what the UN does and even after all these years, it’s still an honour to work here.”

Sergeant Derek Levy also cherishes his nearly three decades at the UN, particularly the traveling that he has done. “It has exposed me to nations and environments that I normally would not have visited, such as Cambodia, Bosnia and Croatia.”

But back at HQ, you may come across a select group of Labradors and their Security Officer handlers. They are the K-9 Unit – checking vehicles, meeting rooms, packages and pretty much anything that springs up. In a year, the K-9 Unit handles some 30,000 searches. 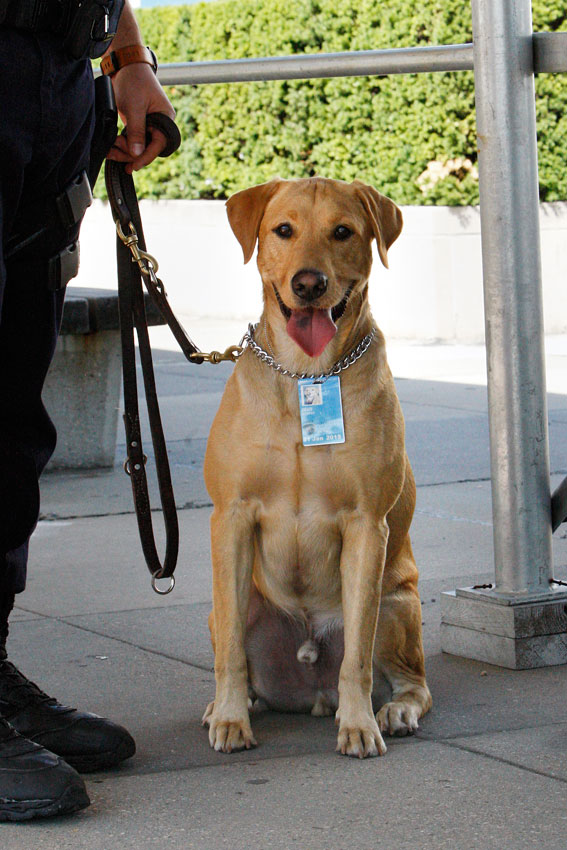 Throughout the upheaval of the massive, years-long renovation of the UN’s iconic but shop-worn headquarters complex, the dogs have been kept on their toes, checking commercial vehicles entering the grounds. As the UN hosts the General Assembly, with tens of thousands of people pouring into the complex annually in September, the K-9 Unit is a key part of the security process. They must carry out their important duties without hindering the work of the Security Officers, which is why mild mannered Labradors were selected as the dog of choice.

Handler Sargent Wilson Barry explains, “When the Labs are out in public they look friendly and approachable. They encourage the staff and the public to come and talk to us.”

Officer Ivette Garcia proudly calls her black Labrador Shane a partner. “I first began working with Shane in June 2006, when I was selected as the first female Security Officer to attend specialized training at the New York State Police Academy. Shane and I graduated together in July and I had the honour of being the first female canine handler in the history of the United Nations. Today, Shane and I are inseparable.”

“Whenever the Organization has a major event such as the General Assembly, Shane and I are hard at work facilitating safe movement of staff members,” Officer Garcia elaborates. “We also work in conjunction with the New York Police Department to maximize security.”