Four global transport initiatives announced at the United Nations Climate Summit today aim to put the transport sector on a new track towards a low-carbon future and save trillions of dollars in fuel costs in the process.

According to the International Atomic Energy Agency (IAEA), a shift to sustainable, low-carbon transport by the middle of the century could save governments, companies and individuals up to $70 trillion. And the UN’s Intergovernmental Panel on Climate Change says a shift could prevent greenhouse gas emissions by transport from doubling by the middle of the century and to achieve the internationally agreed goal of a maximum 2 degrees Celsius rise in global average temperature.

Transport contributes about one quarter of energy-related global greenhouse gas emissions and about one fifth of energy use. Under a “business as usual” model, energy use and green gas emissions are projected to rise by nearly 50 percent by 2030 and even more after.

The Urban Electric Mobility Initiative (UEMI), launched today, wants to increase the number of electric vehicles in cities to least 30 percent of all new vehicles sold on annual basis by 2030 and make cities friendly to their use. The plan is supported by private companies including Michelin, one of the largest tire manufacturers in the world, as well as UN-Habitat.

“Mobilizing support from the private sector is vital to enable us to implement technological breakthroughs in urban mobility” said Joan Clos, UN-Habitat Executive Director, in a statement.

On the train side, the International Union of Railways (UIC) – with 240 members worldwide including in Europe, China, Russia, India and the United States – launched the Low-Carbon Sustainable Rail Transport Challenge to promote the use of rails for freight and transport.

“We expect this initiative to result in 75 per cent reduction of carbon dioxide emissions from rail transport by 2050. In total, we aim to save over one gigatonne of carbon emissions globally through improved energy efficiency and through building partnerships,” said Jean-Pierre Loubinoux, Director General of the International Railway Association.

Another initiative titled the International Association of Public Transport (UITP) Declaration on Climate Leadership brings together 1,300 member organizations from 92 countries to provide access to climate-savvy public transportation for those living in cities.

Governments under the auspices of the International Civil Aviation Organization (ICAO) also promised to step up commitment to reach the industry’s long-term existing global goal to halve net CO2 emissions by 2050 compared to 2005 levels.

To that end, ICAO is supporting the development of sustainable alternative fuels for aviation by working with partners to develop a global CO2 standard for new aircraft and to design and implement a global measure for international aviation from 2020 onward. So far, over 100 industry leaders – including Virgin Atlantic and Thai Airways – have taken action toward that goal.

Sustainable transport is one of eight action areas identified as critical during the Abu Dhabi Ascent, a two-day meeting held in the United Arab Emirates in May 2014. Other topics include agriculture and renewable energy.

♦ Receive daily updates directly in your inbox - Subscribe here to a topic.
♦ Download the UN News app for your iOS or Android devices.
transport 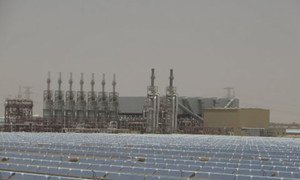 Multinational oil and gas companies, major producing States and over two dozen cities today joined forces to slash methane emissions in a partnership that can have an immediate impact in reducing global warming as part of United Nations Secretary-General strategy to tackle climate change.