The frenzied preparations for just a single State visit have been popularized by the television series The West Wing . Now multiply that frenetic energy by 196 – the number of leaders expected to address the opening of this year’s United Nations General Assembly session – and you get an idea of the sheer amount of work being put into making sure everything goes off without a hitch.

And this year, there is even more activity at UN Headquarters ahead of the high-profile arrivals on : construction workers in bright neon yellow vests are working around the clock both inside and outside the newly renovated iconic General Assembly Hall to get it ready in time.

“How gorgeous is this renovated entryway to the United Nations General Assembly building” tweeted a veteran UN correspondent after getting a sneak preview of the Hall, which has the look and feel of the original structure from the 1950s but with the state of the art electronics, improved and more efficient systems for heating ventilation and air conditioning, as well as better safety and security features make the building fit for the 21st century.

The seven-year renovation project has included replacing the gold-leafed background behind the iconic UN emblem that had become caked with tar and nicotine over the decades of cigarette and cigar smoke, resurrecting the original forest green carpet that had become faded and threadbare in spots, as well as restoring the leather desks and chairs to their original form and colour¬ – with the exception of removing the ashtrays and raising the desks one-and-a-half inches to make them wheelchair accessible.

Michael Adlerstein, who heads the Capital Master Plan, as the $2.1-billion renovation of the 17-acre UN Headquarters complex is known, also noted that certain traditions could not be tinkered with. 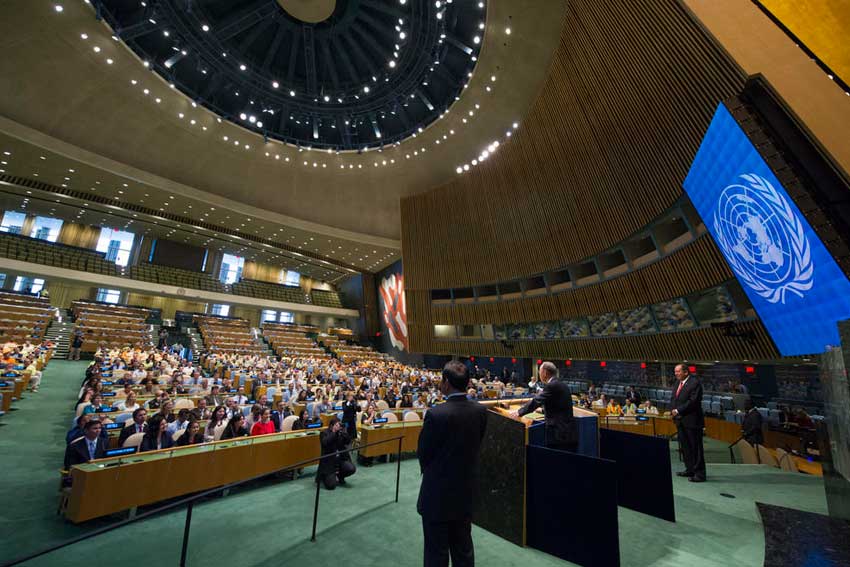 For example, he said, a decision was taken not to install a headphone audio system with two earpieces and to instead keep the “one-ear piece system” because “delegates like to have one ear tuned into the Speaker and the other to their colleagues.”

The new General Assembly Hall will also have room to grow ¬for more than 193 Members – with space now for 204.

“At this stage, it is anticipated that some 144 Member States will be represented at the highest level of Head of State and Government,” according to the Department for General Assembly and Conference Management (DGACM) responsible for the smooth running of the 69th session of the Assembly, which officially opens today.

They will start arriving a week from today for the Assembly's annual high-level segment, known as the “General Debate”, to tackle myriad crises, ranging from the deadly Ebola outbreak in west Africa to ongoing conflicts in Syria, Iraq, Ukraine and South Sudan, as well as the no less urgent threats such as the long-term consequences of climate change and ongoing poverty and hunger in many parts of the world. 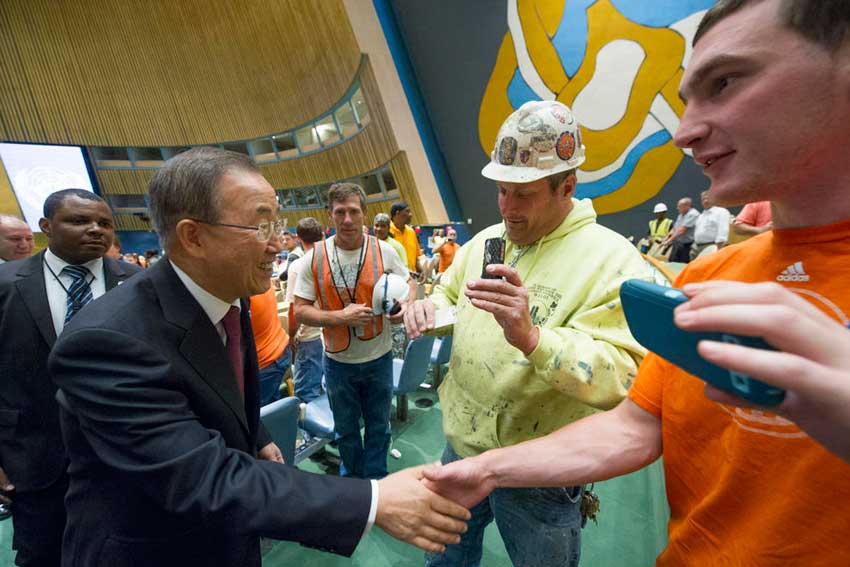 Secretary-General Ban Ki-moon (left) greets some of the workers who have been helping to renovate the General Assembly Hall at UN Headquarters in New York, 15 September 2014. UN Photo/Eskinder Debebe

Seasoned staff, meanwhile, are revving up preparations for the big day.

Their tasks can be as detailed as ensuring that the flags of all UN Member States are correctly identified and steam-ironed crisp to ordering the correct shade and number of blue hydrangeas – representing the official UN colour of light blue – for the flowers adorning each table at the official luncheon of the gathered world leaders, as well as the very careful vetting of the food menus so as not to offend any cultures.

The main course usually ends up being lamb or beef, with vegetarian and vegan options. “Most men prefer meat,” according to a UN Protocol staffer.

UN Protocol, which has been handling the mushrooming protocol tasks with the same number of staff of 10 even as the number of Member States climbed from the original 51 to 193 today, arranges for accreditation of guests, VIP passes, the main luncheon and a separate event – a tea – for the First Ladies, arranging the bilateral meetings of UN Secretary-General Ban Ki-moon with the visiting dignitaries and escorting each and every speaker to the famed General Assembly podium at the right time. 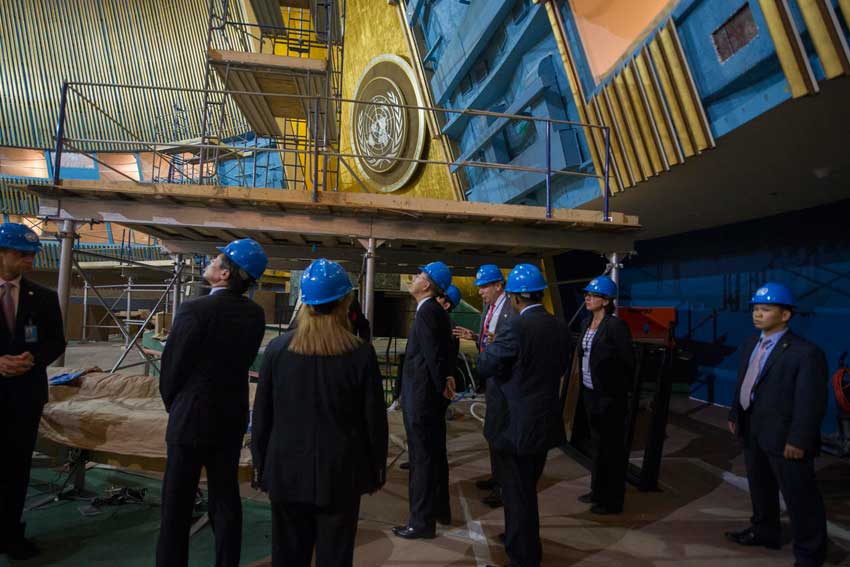 Secretary-General Ban Ki-moon (centre) tours the General Assembly Hall where construction work is taking place under the Capital Master Plan (CMP) for the renovation of the UN Headquarters complex. Renovation of the Hall is scheduled to be completed in time for the opening of the Assembly’s 69th Session in September, 9 June 2014. UN Photo/Eskinder Debebe

Some 2,000 media accreditations are given out for the week’s events, and a record 4,000 delegates from 900 non-governmental organizations from more than 110 countries already attended pre-General Assembly conferences.

The number of speakers underscores the breadth and universality of this annual gathering: 195 speakers are expected to address the General Assembly starting on September 23 over a period of six days on major issues of international concern, comprising all the 193 UN Member States, as well as the Observer State of the Holy See, the Observer State of Palestine and the delegation of the European Union.

This year, reflecting the magnitude of issues that confront the world, the start of the General Debate has been pushed for the first time to a Wednesday instead of Tuesday, to make room for a World Conference on Indigenous Peoples, and a special session of the General Assembly on Population and Development.

The UN Secretary-General himself, on 23 September, will be hosting a climate change summit, an initiative directly spearheaded by him and aimed at galvanizing the political commitment at the highest political level necessary towards sealing a comprehensive global deal in 2015 to effectively and sustainably combat climate change. 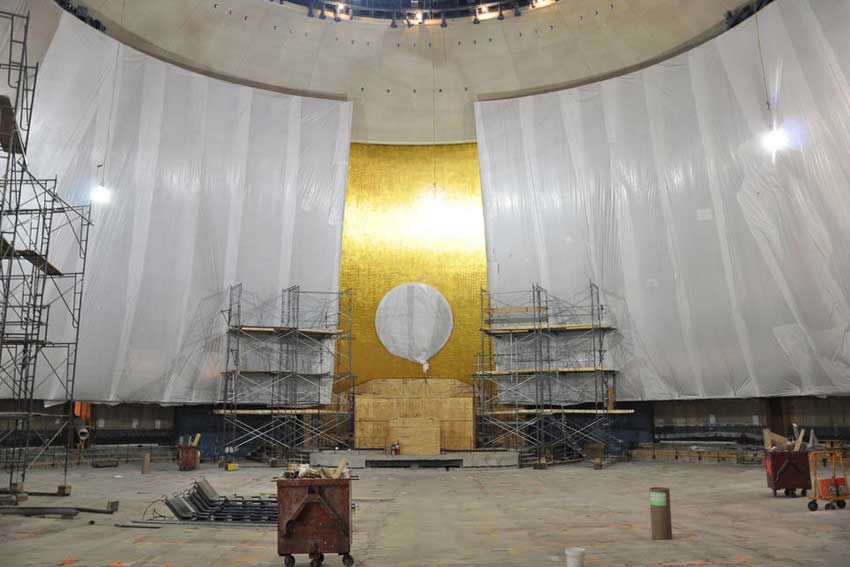 Work on the renovation of the UN Headquarters complex in New York continues under the Capital Master Plan (CMP). A view of the the General Assembly Hall where construction work is underway, 10 February 2014. UN Photo/Werner Schmidt

The range of items that will be discussed on the side lines of the General Assembly speech-making reflect the number of conflicts and challenges the UN and the world are facing today. They range from Somalia, the Democratic Republic of the Congo, Guinea Bissau, Myanmar, Cyprus, Lebanon, Syria, Central Asia, Mali, Central African Republic, and the elaboration of the so-called post-2015 development agenda, to be adopted next year as a successor framework to the landmark Millennium Development Goals (MDGs).

In other meetings next week, United States President Barrack Obama will convene a Security Council summit on 24 September to draw high-level international attention and action to the growing and dangerous phenomenon of foreign terrorist fighters. In addition, Secretary-General Ban has announced a major meeting on 25 September to also focus on a more robust international response to Ebola crisis in West Africa.

“The provision by the UN Secretariat of conference services critical to the smooth functioning of the intergovernmental deliberations of the United Nations is one of the original purposes of the Organization,” Mr. Gettu said. 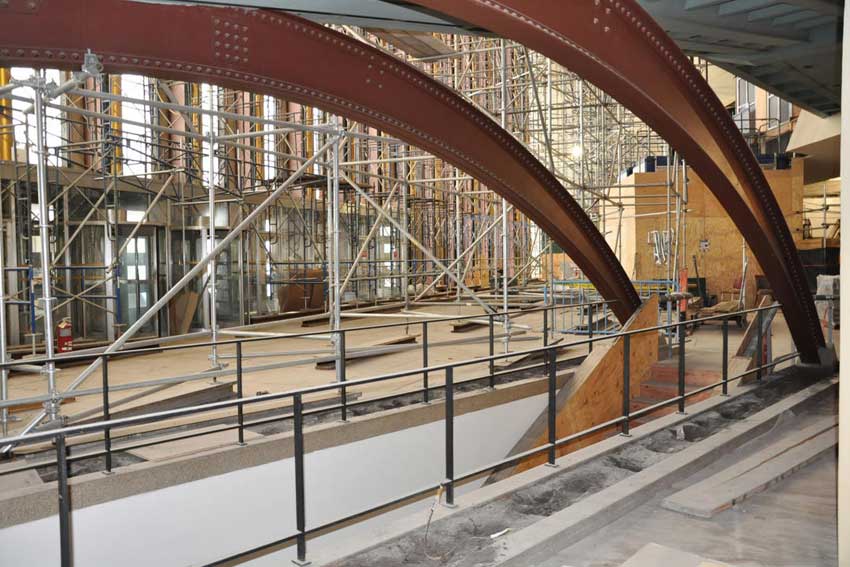 Work on the renovation of the UN Headquarters complex in New York continues under the Capital Master Plan (CMP). A view of the Visitors' Lobby of the General Assembly Building, where construction work is underway, 21 January 2014

This includes months of coordination meetings, preparation of a series of parliamentary documents, their translation in the United Nations’ six official languages, preparation of meeting notes for the President of the General Assembly – Sam Kahamba Kutesa of Uganda will head up the 69th session – liaison with Member States, briefings to the Assembly President and his team, briefings to Member States, and allocation of rooms, amongst many other tasks.

As customary, the President of the General Assembly will opens the first plenary meeting on 16th September. Then President Kutesa will start guiding the global conversation on some 175 items, contained in the draft agenda for the 69th session, covering a wide-range of topics of global concern from development to security, and from human rights to the promotion of justice and international law.

As the final preparations are reaching their peak for year’s session, veteran staff have already begun to think about and brace for next year’s General Assembly session: 2015 will be the 70th anniversary of the United Nations, and record numbers are expected to descend upon UN Headquarters in September 2015.

With an “intense and important year ahead,” United Nations Member States must work to build a framework that will sustain and finish what was accomplished with the landmark Millennium Development Goals (MDGs) in the fight against poverty, hunger and disease, while rising to challenges old and new – not least climate change.