UN Photo/Catianne Tijerina
A view of the official hand-over ceremony transitioning peacekeeping responsibilities in the Central African Republic from MISCA to MINUSCA.
15 September 2014

On the successful completion of MISCA’s mandate, Mr. Ban hailed the efforts made by the Mission, which has saved and protected many lives, alongside the French Sangaris forces and the European Union Force in the Central African Republic.

In a statement issued in New York, ahead of a ceremony in the Central African Republic capital, Bangui, which included Hervé Ladsous, Under-Secretary-General for UN Peacekeeping Operations, and Babacar Gaye, the head of the new Mission, the UN chief expressed his great appreciation of the “exemplary collaboration” between the United Nations and the African Union (AU) that enabled a seamless transfer of authority, including the re-hatting of as many MISCA contingents as possible, in accordance with UN standards.

Mr. Ban also underlined the important role of the international mediation and assistance of international partners, including the Economic Community of Central African States (ECCAS), in the process of restoring the rule of law and ensuring protection of human rights in the country.

While welcoming the newly established mission, Mr. Ban expressed his deep concerns about the ongoing violence in the country. Amid security, humanitarian, human rights, and political crisis in the CAR, he reiterated his call for all the parties to immediately put an end to attacks against civilians, in accordance with the cessation of hostilities agreement. The Secretary-General also stressed the importance of the inclusive political process that needs to be sustained by all Central African stakeholders in order to ensure the successful completion of the country’s transition.

The newly established Mission will prioritize the protection of civilians and facilitation of political process, including implementation of provisions of the Agreement on Cessation of Hostilities, and setting up a mechanism to investigate violations. According to the latest UN figures, MINUSCA’s presence stands at some 6,500 troops, 1,000 police and a complement of civilian staff that are progressively deploying throughout the country.

The authorization for the full deployment of the UN Mission was given by the Security Council on 10 April 2014, and the Force Commander of MINUSCA, Major General Martin Chomu Tumenta, was appointed by Secretary General later in July.

“We are going to have on the ground all the comparative advantages of a UN peacekeeping mission,” said Mr. Gaye in an interview with UN Radio, noting specifically predictable and sustainable financial resources for the Mission, years of experience in the field of peacekeeping, and the comprehensive approach that the United Nations has been implementing, which is now recognized as an area where it is ahead of regional organizations.

At the same time, he said, the ongoing commitment and support from regional organizations, including ECCAS and the AU would remain vital. Indeed, “this is not going to be a success of [only] the United Nations. It is going to be the success of the entire international community” to help CAR stand on its own feet and benefit from a sustainable stabilization.

The CAR has been embroiled in fighting, fuelled by what are believed to inter-communal retaliatory attacks between anti-balaka and Séléka rebels, after the latter were ousted from power in January 2014. An estimated 2.2 million people are believed to be in need of humanitarian aid as a result. 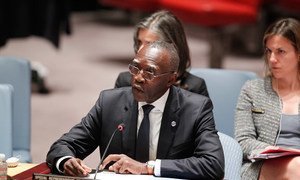 With a month left before the full deployment of the United Nations mission in the Central African Republic (CAR), the UN envoy for that country today said that while there have been pockets of improvements, the overall humanitarian and security situation in the country remains dire and “extremely volatile.”